Photograph of a Saint at Mass

.
Courtesy of Jeffrey, I have this picture of a Saint at Mass. 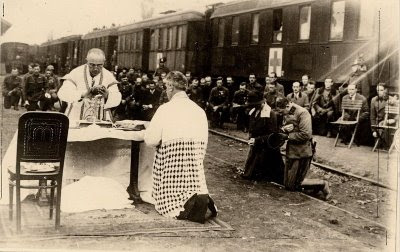 Kneeling at the right is His Imperial and Royal Majesty the Emperor Charles, now Blessed Charles of Austria.
.
I posted some time ago a picture of an Australian Padre in New Guinea in WWII. A subtext to that post was the adaptability of the Extraordinary form of the Mass: that adaptability is shown here too, where Mass is celebrated in a railway siding, next to a hospital train.
.
But as worthy of note is the adaptability of an Emperor, who humbles himself in front of his Sovereign Lord.
Posted by Ttony at 20:16

Why should the humbling of an Emperor at a Mass be worthy of note?

Because, used to the finest of things, he could have had a prie-dieu brought with him, or he and his wife could have remained seated on the chairs behind them. Here is a man brought up in unimaginable luxury, and the only privilege he claims is to be present at the action of a priest turning water and wine into God.