.
Ben Trovato's blog has had a couple of thought provoking posts about the Liturgy recently.  Arising from a comment on a posting on Cardinal Heenan's comments on the new Rite of Mass, he produced a second which looked more closely at what is perhaps the most frequently raised criticsm of the new Rite by those attached to the former Rite, that is that there is less emphasis on the sacrifical action of the Mass, and less emphasis on the Real Presence.

In a separate part of the thicket, I have been following the Society of St Gregory's forum, in particular recently a discussion about the musical settings of the new translation of the Mass which the musicians who are members of the Society are using.  Two things stand out clearly: first, that their love of the Liturgy and their wish to beautify it in music are as strong as those of any member of the LMS; and second that they stand hard and fast in the tradition of Bugnini and the Consilium, as rooted in Pope Paul's New Mass, as the LMS members are in Pope John's Old Mass.

A narrative has been developing, in the context of the Pope's wishes to better situate our understanding of Vatican II in the context of the tradition of the Church, which suggests that the Council did not want the changes which Mgr Bugnini and his Consilium produced: that they were a bunch of adventurers playing fast and loose with some desires for cautious and judicious change expressed by the Bishops in the Council.  Chasing down a comment in Bugnini's Reform Of The Liturgy to make a point in a comment on Ben's blog, I realised that he actually felt confident that his Reform was rooted entirely within the express wishes of the Council fathers, and cited Sacrosanctum Concilium, the Apostolic Constitution on the Liturgy solemnly proclaimed at the Couincil, as his source.

Reading it (it's here), you can see why he thought he might have a point.

"To promote active participation, the people should be encouraged to take part by means of acclamations, responses, psalmody, antiphons, and songs, as well as by actions, gestures, and bodily attitudes. And at the proper times all should observe a reverent silence."

"Particular law remaining in force, the use of the Latin language is to be preserved in the Latin rites.  But since the use of the mother tongue, whether in the Mass, the administration of the sacraments, or other parts of the liturgy, frequently may be of great advantage to the people, the limits of its employment may be extended. This will apply in the first place to the readings and directives, and to some of the prayers and chants, according to the regulations on this matter to be laid down separately in subsequent chapters.  These norms being observed, it is for the competent territorial ecclesiastical authority to decide whether, and to what extent, the vernacular language is to be used; their decrees are to be approved, that is, confirmed, by the Apostolic See. And, whenever it seems to be called for, this authority is to consult with bishops of neighboring regions which have the same language."

"Even in the liturgy, the Church has no wish to impose a rigid uniformity in matters which do not implicate the faith or the good of the whole community; rather does she respect and foster the genius and talents of the various races and peoples. Anything in these peoples' way of life which is not indissolubly bound up with superstition and error she studies with sympathy and, if possible, preserves intact. Sometimes in fact she admits such things into the liturgy itself, so long as they harmonize with its true and authentic spirit.   Provisions shall also be made, when revising the liturgical books, for legitimate variations and adaptations to different groups, regions, and peoples, especially in mission lands, provided that the substantial unity of the Roman rite is preserved; and this should be borne in mind when drawing up the rites and devising rubrics."

My point is not that Clown Masses or Easter Bunny Masses are somehow validated, but that the overwhelming majority (2147 for, 4 against) of Bishops at the Council in 1963 believed that radical change in the form of the Roman Rite and in the way that lay people participated in it was necessary, and gave Bugnini a framework in which to develop this new form.  We can't pretend that he was some sort of Militant Tendency entryist, an ecclesiastical Derek Hatton burrowing within to change by stealth what everybody wants to hold fast to, other than by denying that he was doing what a couple of thousand Bishops, including, as far as I can tell, all of what might be thought of as the diehard traditionalists, wanted him to do.

I don't think that the Michael Davies argument - that a small group of periti deliberately conspired to make Sacrosanctum Concilium sufficiently vague to allow them to do as they wished subsequently - holds either: it's quite clear, for example, from the extract above, that vernacular readings were intended to be a first step, and that its use could be extended wherever the local authorities wanted.

All of which suggests that these waters are deep, even if they aren't still, and that any resolution is a long way off, assuming that "resolution" means that some sort of thesis and antithesis need to be synthesised.  Meanwhile, the Bishop Davies who has recently turned over a major church in his diocese to the Traditional Rite is going to be welcomed to a Confirmation celebration in another of his parishes by a guitar group which writes its own settings of the Mass and hopes to get him at least to tap a toe.  Is that really what two forms of the Roman Rite should mean?

I'm interested in how they became influential: whose agenda was suited by support from lay organisations?  Who provided them with ecclesiastical support?

And how far were they used by "progressive" Bishops and clergy to leapfrog their more conservative confrères?

I'm thinking of organisations like the Laity Commission and the Newman Society, in particular in the early phase, but there might be more. Later on you come across lots more.  I obviously don't mean the KSC, SVP, UCM or CWL: PBI, to add another TLA to the list.

Any pointers gratefully received.
Posted by Ttony at 18:27 3 comments: Links to this post 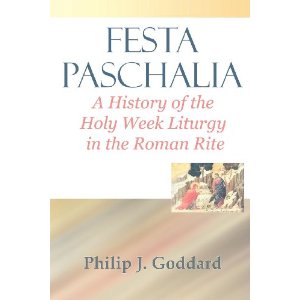 I bought "Festa Paschalia" for non-spiritual Holy Week reading, as most of my knowledge of the liturgical history of this period comes from Herbert Thurston's "Lent and Holy Week" which, while fascinating, is a bit dated, receiving its Imprimatur and Nihil Obstat in 1904.

I'm sure that Philip Goddard won't mind my recommending his book as a "must read" for anybody with any interest at all in the development of the structure of the week, even if a recommendation from The Muniment Room isn't exactly the last step before ordering a pipe of the Cockburn '24.  The scholarship feels very sound indeed, and there are odd flashes of insight, for example into the relationship between the readings on the Ember Saturday in Lent and the modelled-on-the-synagogue pattern of readings in first century Christian services﻿ that took my breath away.

The awfulness that comes over the reader has nothing to do with the book itself, but with what starts as a casual throwaway line, and becomes a sort of macabre colophon to many sections of the book: "its form was fixed by the end of the seventh century and remained unchanged until 1970" - a paraphrase of something repeated again and again.

I can understand the motivation of the litugical archaeologist, even if I think it is a self-evidently wrong approach to liturgiology; but what was it about the Reformers of the 50s and 60s that led them to such hatred of tradition - tradition in the sense of "doing things the way we always do them".  How did these people cope with family Christmasses (for example)?  Did they suddenly insist that from 1970 on there could be no turkey or goose, as these were late interpolations, but that everybody should eat salted pork?  That the TV couldn't be watched as it hadn't been invented in the first century and that families should play "Hunt the Myrrh" or (a rather different version of ) "Pin the Tail on the Donkey"?  I could go on ...

It is still quite easy to come across pre-1955 hand Missals for a reasonable price (less than £40 - compare the price of a decent 1962 Missal): do think about buying one and using it as a guide to how we might have been celebrating festivals like Passiontide and Easter if the practice of organic development hadn't been allowed to give way to the slash and burn we endured at the end of the 1960s.

A very Happy and Holy Easter from a grumpier than usual Eeyore.
Posted by Ttony at 18:20 5 comments: Links to this post

Poem For The Season

.
Mgr Ronald Knox famously dreamed of the day he could answer every letter on the letters page of The Times with one letter.  It would be even harder to do so with blogs, but here is something which answers recent posts from both Valle Adurni and Mac: the Sequence from the Mass of the Five Holy Wounds according to the Use of York, which fits the metre of Good King Wenceslas (with the exception of the final two verses.

A Holy Triduum to you all.