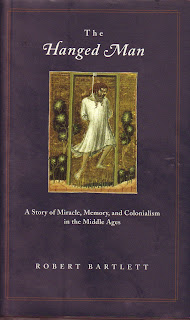 The Hanged Man is a wonderful book.  It uses the documents of the process in the cause for the canonisation of St Thomas of Hereford - Bishop Thomas Cantilupe - to draw conclusions about how the mediaeval world actually worked.

It wasn't a nice place, by today's standards.  The man who was hanged, William ap Rhys, known as William Cragh (Scabby William) from Swansea, was ordered to be hanged by the Lord of Swansea, who thoughtfully arranged for men of William's family to carry out the hanging.

And restore him to life he did.

The book gives a wonderful picture of the mental and physical world in which all of this happened.  Time is measured in the time it takes to walk a quarter mile; distance is measured by the flight of a crossbow; time is approximate: "some fifteen years since Michaelmas next".  The book concentrates on the social and political conditions, but the religious life is as distant from us.  Bishops are civil servants and raising taxes for State and Church is an important part of their life.  St Thomas had been excommunicated by the Bishop of London in an argument over tax yields.  Some things are recognisably the same: the canonisation process for example, but it was relatively new in the early forteenth century.

I also read some jottings from the diary of the papal Master of Ceremonies who accompanied Pope Leo X to meet King Francis of France at Bologna in 1515.  Amidst the descriptions of ceremony came a curious section.  The Pope wanted Francis out of Italy as quickly as possible, but the King wanted to attend a Papal Mass.  The Pope only said Mass on Sundays, and need brooked for no delay.  So the MC said

"that next Thursday, that is feria quinta, was the feast of St Lucy, and that he might celebrate on that day, as Pope Alexander had celebrated in the presence of King Charles on St Andrew's Day; and that he might say one prayer in the Mass without commemoration of the feria, for we could have the Mass of the feria said earlier by someone else; and that pleased the Pope, especially when I said that all things were observed at this Mass as on Christmas Day, with a Cardinal Bishop assistant, and two epistles (Greek and Latin), and two Gospels, and the other solemnities; and it pleased the Pope to so so, and he immediately ordered me to begin preparations; and at once I had a whole army of carpenters and workmen busy transforming the interior of San Petronio and providing for the crush."

When I hear about the wrong-headedness of Pius XII, or the ahistoricity of the reforms of Pius X, or the classicist Breviary Reform of Clement VIII, or the mistaken formal entrustment of the Reform of the Liturgy to Pius V by the Council Fathers of Trent, I can't help feeling that we could carry on back through the anti-traditional ripping up of the Liturgy by Gregory the Great, following its earlier mutilation by Gelasius in an attempt to reach some archaeological truth which would be about as valid as Eucharistic Prayer 2!

We can have the 1962 Missal because it never stopped being said.  We can't have the 1950 Missal back, because it has stopped being said.  We could change current practice and introduce folded chasubles, the Vigil just after Dawn, no Communion on Holy Saturday etc etc etc, but it won't be a restoration, but a radical novelty dressed as a return to the earl(ier)(y) Church: exactly the same accusation that is thrown at Archbishop Bugnini.
Posted by Ttony at 20:38

I don't know about that..
Murder in the Cathedral is a nice dramatic play, but it has St Thomas Becket woffling in hamlet-mode "sublest form of treason , to do the right thing for the wrong reason".
One suspects, for a start, let alone the midsets you comment on, that a saint would know we do that all the time, and it's the whole history of the church, one's rationalizations of divine inspiration , ASSUMING ONE FOLLOWS SUCH AT ALL, are outdated before they're even recorded.
Point taken , that it's far easier to do the wrong thing for even wronger reasons,with which I'm personally more familiar, nonthe less after a few more empires rising and sinking like billows, and quite possibly adjustments of the reculer pour mieux sauter motivation you mistrust , in 25 0r 50 or 100years time, our descendants will see yet again how the lord makes silk purses out of sow's ears.
oink

I wholeheartedly agree with your observations, very well put.

The book sounds like a cracker, thank you for mentioning it, I will try to get hold of it soon.

Needless to say, I disagree - both with the legalism of your approach and its basis in fact.

The '62 Missal certainly DID "stop being said". It was replaced by (I think) three subsequent, substantial revisions before the imposition of the Missal of Paul VI. It was resurrected largely as a consequence of negotiations between Archbishop Lefebvre and the Vatican, and its subsequent quasi-universal adoption by the wider Traditionalist movement has no other basis than this arbitrary decision to fix upon the edition closest to the (beginning of)the Council - the date being the significant deteminant, rather than the integrity of the rite. The '62 Office is perhaps the worst possible - the absolute nadir: a dog's dinner, hacked to pieces with its "transitional calendar", all those orphaned third lessons at matins so on. Bishop Williamson likes it "because it's shorter", which tells you all you need to know.

On the other hand, I know priests who never ceased using the Pius X Breviary; I had the privilege of attending an entire pre-1950 Triduum in the mid-eighties, before the '62 uniformity was imposed by the SSPX, and adopted by its associates, and the older use (three collects, octaves, vigils, etc) was still in vigour.

Anyway that's all by the way. If your idea of Tradition is whatever the Pope of today says it is, then I suppose you have to knuckle down and learn from Ignatius Loyala to believe that white can be black if he requires it.

(Gregory the Great's advice to St Augustine on liturgical usages for the English demonstrates that his reforms are not in fact of a piece with the pattern established following Trent).

...and does the "Missal of '62" include that new Good Friday prayer, artfully re-engineered so as not to exclude absolutely the dispensationalist heresy insinuated in the Novus Ordo? Or not?

But, as Moretben states above, the 1962 rite did stop being used.

The 1962 rite of Mass stopped in England and Wales on Advent Sunday 1964 when the '1965' rite came into legal force (other countries adopted it in Lent 1965). A further, revised, rite of Mass and accompanying changes came in 1967. No priest could legally use the the 1962 rite until the indult Quattuor abhinc annos in 1984.

Elderly priests who could not cope with the 1970 Missal could be granted permission by their Ordinary to use the 1967 rite in Masses sine populo. Similarly the 1971 'Heenan' indult specified the use of the 1967 rite.

1962 was chosen by Abp. Lefebvre in 1983 as, by then, a constructed argument had been created blaming the SVC for all the Church's woes.

There were small cohorts of clergy in England who never accepted the Pius XII changes thinking it was all a 'flash in the pan'. Some of those still alive in 1973 rallied around Fr. Peter Morgan when the St. Pius V Association was formed in England. They, the pre-cursor to the SSPX, didn't use 1962 and neither did the LMS. The latter were supposed to use 1967 but went a lot further back than that.

My Ordo is still taken by many SSPX clergy who don't use the 1962 Breviary (except in public), views shared by at least some clergy in the 'in full communion' groups too.

To play with history and suggest 1962 was in continuous use is pure revisionism.