.
Outside the gate of every Abbey was the Ecclesia ad Portam - the Church at the Gate - where Mass was provided for local people.  After the Reformation, many of these disappeared, or were converted into parish churches.  This one remains in fairly isolated countryside.  It isn't in a centre of population.  Evensong is celebrated there on the fifth Sunday of the month except in summer.﻿ 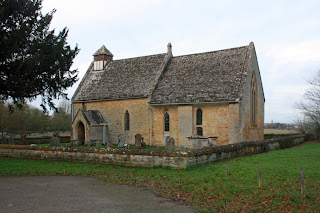 The first thing you see is that this is a Church on which nothing but the minimum has ever been spent.﻿ 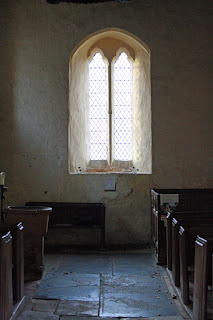 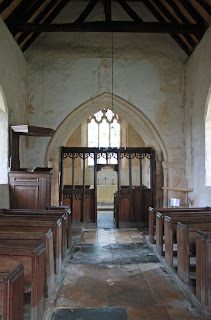 But when you look closer you realise that the church was once exuberantly decorated:
﻿ 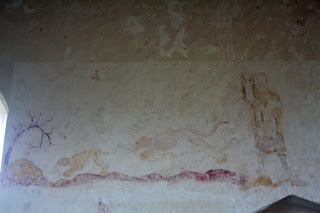 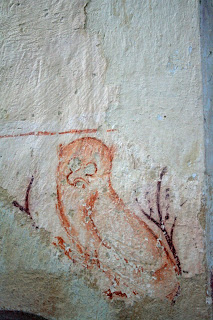 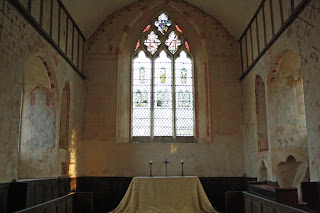 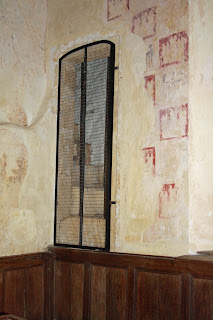 and that a tiny bit of the glass in the original Abbey had been saved, and was incorporated into a window at the same time that the murals were uncovered.﻿ 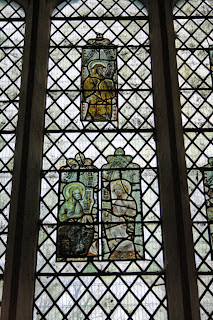 You could say Mass here tomorrow.  You could keep the sacred oils in the aumbry and use the piscina on the south wall.  But it won't happen. 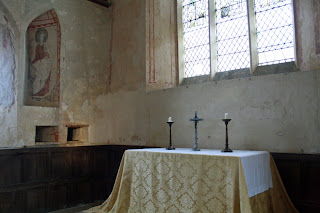 There wasn't really very much persecution of the Church in very much of the country.  From the 1520s on, the State gradually took over and as long as people minded their own business and didn't cause trouble, for example by professing their Catholicsm openly or by becoming or harbouring priests, they were left alone, either to be a very Catholic sort of Anglican﻿ or, in the north of the country, to be Catholic, but discreet.  (Catholics were opening their own cemetery in Little Crosby as early as 1611.)  This lack of hard persecution was itself a successful form of soft persecution: untutored in the Faith, unnourished by the Sacraments, most of the faithful fell away, except for those who heroically persevered.
In the nineteenth century, people began to uncover what had been lost.  In the twentieth (and the events of the twentieth century no doubt enlightened the minds of historians) the great con trick played on the English people became clear.  The State had taken their Faith from them, and most of their leaders hadn't actually fought back.  The lay people who had tried to fight back had been crushed, and the few who remained retreated into the discreet non-conformism which at least kept a spark of faith alive.
Move along please! Nothing to be seen here!
.
Posted by Ttony at 19:49

Thank you, Ttony, for the lovely photographs of Hailes church. The wall-paintings are wonderful, aren’t they? Since the first time I saw them I have been particularly fascinated by the hare-coursing scene, which you show in one of your pictures. In another of the views, it is poignant to see those steps in the chancel wall, going up into nothingness. Even in that tiny space, there must once have been a small rood-loft. How the parishioners must have loved their little church!

In our previous life in the north-west, we often used to go to Sunday Mass at Little Crosby. When we knew it, it had something of the atmosphere of a still-surviving recusant village. This would have been helped by the continuing presence of the Blundell family of Crosby Hall. Nicholas Blundell’s diary (extracts from1702–1728) is available on Amazon. It contains a number of discreet references to his status as a recusant, mentioned in passing while he gets on with his ordinary life as a country squire.

I agree with you about the soft persecution of post-Reformation times. Apart from the horrible jolts, it seems to have been a mixture of deception by the authorities and general attrition. I think we may be in for a time of attrition if the same-sex legislation is passed; but there will be jolts too, more or less unpleasant, for those of us who find ourselves having to take a stand. We won’t have to seek them out either; some of us may only have to wait for the first same-sex congratulatory card that goes round the office.