.
3 SUNDAY. Fourth after Easter. The INVENTION of the HOLY CROSS, double of the second class. Second prayers and Last Gospel of Sunday. Third prayers (in Low Mass only) of SS Alexander, Eventius, Theodulus, Martyrs, and Juvenal, Bishop Confessor. Preface of the Cross. Red. Second Vespers of the Feast with commemoration of St Monica and of the Sunday.  [In Dioceses of Hexham and Newcastle, and Liverpool Plenary Indulgence.]

St Catharine of Siena was shifted a week earlier when Pope St Pius V took her feast day and has been moved subsequently: ironically, her feast day in the modern calendar is on the anniversary of her death.  That date previously was taken by St Peter the Martyr (these are all Dominicans: was the Order of Preachers consulted?) but he seems to have been moved to the previous day.

The feast of St John before the Latin Gate commemorates St John the Evangelist's being thrown into a pot of boiling oil while on a visit to Rome during the reign of Domitian but being preserved unharmed. It was removed from the Calendar in Pius XII's time.

Each of the three Archangels the Roman Church recognises by name: Michael, Gabriel and Raphael: had separate feasts in 1863, and the Apparition of St Michael in Siponte (in Apulia) to the local Bishop had its own feast as well. It was removed from the Calendar in Pius XII's time. I wonder if the reformers thought that the whole business of St Michael as warrior against Satan was a bit superstitious: did they think that there's nothing modern about saying the prayer to St Michael every time you go to Mass?

That said, the Universal Calendar does have to be pruned back every now and then (I mean once a century or so) as the immediate relevance of the heroic virtues of some saints does change.  It doesn't mean getting rid of saints, or having to pretend like Bugnini and the boys that certain saints were pious legends.  It does mean understanding what the calendar is for.  I think that the balance of the 1962 calendar is pretty good: what might have felt fifty years ago like rather a lot of saints of the Counter Reformation era feels, in the world of 2015 where the Church faces enemies within as well as without, like a lot of good examples of confessors and martyrs who faced a world which is more similar to ours than is the world of the Roman Empire. And, don't forget, the Masses of Saints no longer included on the Universal Calendar can still be said. (This discussion is, of course, completely different from one on the ranking of feasts, or on the precedence of Sundays.)

(By the way, archangelology looks like an interesting rabbit hole to burrow down one day.  Start with Wikipedia here and then start following links.)

The parish of St Mary on the Quay in Bristol is served by Jesuits, the Revv William Johnson, Henry James, Frederick Smyth and Antonito Caradonna SJ.  On Sundays there is Mass at 8.30 and a Sermon at 11.00.  Vespers, another Sermon and Benediction are at 6.30.  Weekday Masses are at 8.00 and 9.00.  Confessions are on Wednesdays from 6.00 to 9.00 pm, on Saturdays from 2.00 to 4.00 pm, then from 6.00 to 9.00 pm; they are also heard before the 8.30 Mass on Sundays and before each weekday Mass.  The Confraternity of the Sacred Heart of Mary is established in this Mission in union with that of Notre Dame des Victoires in Paris.

This dates from a few years after 1863 but shows how much altar wine cost in the period. It's as strong as vermouth and costs 50p a gallon. I wonder what sort of martini it would make. 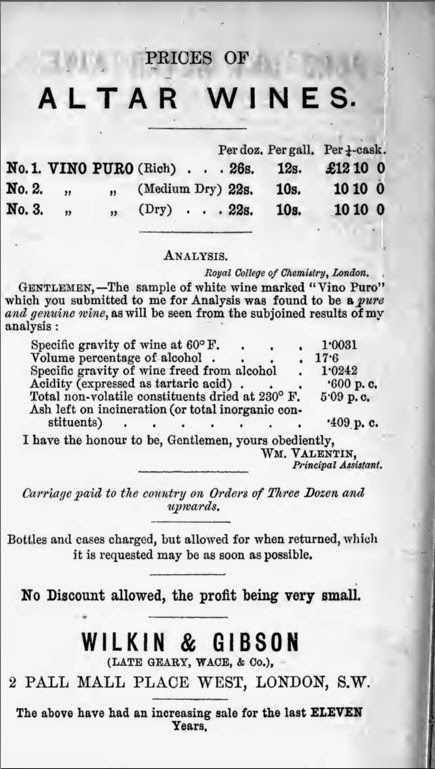 Wine of the grape. As long as there is nothing added, it doesn't matter how long the skins have been in contact with the juice.

White wine is normally used in France; in the Traditional Mass they usually put a fine red ribbon tied around the top of the wine cruet. I don't know what the modern people do.

Yes, my dear deceased Godmother , a religious, who had been in the late fifties in an enclosed convent much of whose income came from completely industrialsed host production, tartly remarked that you can tell the church is run by men:for the church, wine is only worthy to be transsubstanciated if it be the gen article, no more no less, as per your quote, whereas, if yeastless you can put pretty well what you want into hosts, some sort of wheat flour generally being one of the ingredients.
The whatever the poltically correct way to say Ukranian uniates have leavened bread baked by the priest, which can be a abit of atest of ones faith, there you are , Eastern catholics are tough.

Nonetheless I'd always understood Our lord's blood should have something of the colour, and have never seen otherwise ; does any other follower of this blog who knew Father MauRice,aka Couvers, once archbish Brum,know, or remember, if he published ,any of his many odd anedcdotes of ecclesiastical history including on this subject. 17th century Rhineland Palatinate was one.

All moot if the coming persecution is like the 20th century's, circles round our parish's concentration camp survivors talked of secret masses said with a crumb of anything vaguely bready and anthing fruity perhaps a smidgen of orange peel, , mayhap even a raisin, "stolen" , the penalty was death, from the kitchen rubbish, steeped in a thimble.

Was once told-- this would have been in the early '80s-- that white wine had been chosen precisely to disabuse communicants of any "archaic notions", ahem. The local parish is imperfect but there is none of that sort of faithless nonsense on the part of the clerics!