.
21 SUNDAY Fourth after Pentecost. St Aloysius Gonzaga, double of the second class. Second prayers and Last Gospel of the Sunday. Third prayers for the Pope (Anniversary of the Coronation of His Holiness). White. First Vespers of St Alban, with Commemoration of St Aloysius, the Sunday, and of St Paulinus, Bishop Confessor. Red.  [In Diocese of Birmingham, fourth prayers for the Bishop.]


24 Wednesday. (Feast of Devotion) THE NATIVITY OF ST JOHN THE BAPTIST, double of the First Class with an Octave during which Commemoration of the Feast. White. {In Diocese of Liverpool Plenary Indulgence.]

Not a lot to comment on this week.  The Sanctoral moves forward, and there is no Green.

I remember jumping over the fire (or, as wicked observers with an agenda probably said: shuffling alongside the fire with a bit of an upward motion if anybody was looking) several times on St John's Eve, la noche de San Juan (in fact la nueche de San Xuan), in Spain. There is something wrong when the secular world keeps feasts the Church doesn't want to celebrate any more.

Will St Alban be celebrated in England this week? How many children attending Catholic schools will be told about our protomartyr?

Our Lady Star of the Sea in Greenwich is served by the Rev Joseph E North, the Missionary Rector and Dean of the deanery of St Augustine, assisted by the Rev Michael O'Halloran. Masses on Sunday are at 7.00, 9.00 and 11.00. Catechism is at 3.00. Vespers are at 6.30 with a Discourse and Benediction. On Holydays Mass is at 7.00, 8.00 and 10.00, with Vespers at 7.30. On weekdays Mass is at 8.00 and 9.00. On Wednesday evening, there is a Discourse followed by Benediction at 7.30, and on Fridays either Stations or other Devotions at 7.30 pm. On the first Thursday of the month there is Mass at 8.00 am, and Benediction at 7.30 pm for the Confraternity of the Blessed Sacrament established here. The Blessed Sacarament is exposed from High Mass to th Vespers in the feast of the Holy Name, and on the Sunday within the Octave of Corpus Christi, being the two Festivals of the Confraternity.  The Forty Hours Exposition ends on Passion Sunday.  The parish serves the Greenwich Workhouse; Greenwich Hospital; Lewisham Workhouse; and the Hospital-ship Dreadnought.


Here is a list of the Bishops of England, Wales and Scotland in 1863.  Scotland has no Hierarchy, so has Vicars Apostolic instead: Bishops of Sees in partibus infidelium, rather than with territorial juriosdiction of their own, exactly as England and Wales were until 1850.  this also means that the Scots have no calendar of their own but follow the calendar of the Diocese of Rome.  Coadjutors are Auxiliary Bishops who have the right of succession to the See when the Ordinary dies or resigns.How many of the residences are still in Church hands? 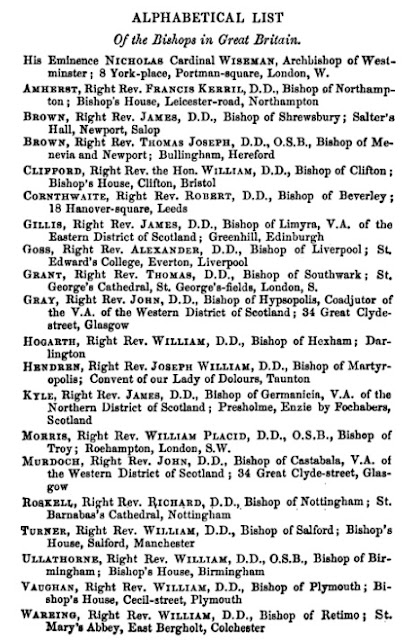