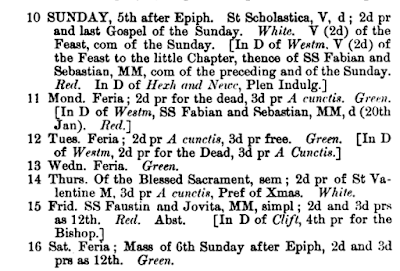 The red is not an exception to the blue' : new extraordinary understanding of Vatican Council II
We have a dramatic, extraordinary and new understanding of Vatican Council II which was always there before our very eyes but no one noticed it.Or if they did, they kept quiet.
The 50- year- old stereotypes of Vatican Council II being a revolution etc are over.
'The red is not an exception to the blue'. This is the new code.It is the hidden clue.
The old one was 'The red is an exception to the blue'.
Everything hinges on this.
The New Theology was based upon the red being a rupture with the orthodox blue.
We now know that the red passages are hypothetical. Always hypothetical.
They are only possibilities, theoretical and speculative.
They do not refer to personally known people in 2018-2019.
'Zero cases of something cannot be exceptions to the dogma extra ecclesiam nulla salus(EENS)' confirms John Martignoni , the apologist at EWTN.Archbishop Thomas E Gullickson papal nuncio to Switzerland and Liechtenstein and Fr.Stefano Visintin osb, theologian-physicist and rector of the University of St. Anselm, Rome - AGREE WITH HIM.
The passages in red are 'zero cases'.
They do not contradict the past exclusive ecclesiology and an ecumenism of return. The Council is no more a rupture with the Syllabus of Errors of Pope Pius IX or the teaching on all needing to be members of the Catholic Church for salvation ( Catechism of Pope Pius X ).
The red never was an exception to the blue.But this was how the liberals and ecclesiastics interpreted the Council and the conservatives and traditionalists, wrongly followed.
Now we know that the blue is no more contradicted by red passages in Lumen Gentium 8 as was suggested by Cardinal Luiz Ladaria sj, at the Placquet Deo , Press conference ( March 1, 2018).
The blue passages and EENS are no more contradicted by the red passages in LG 16 and GS 22 of Vatican Council II. This was a mistake Pope Benedict and Cardinal Ladaria made in two papers of the International Theological Commission, Vatican.They were wrong and Fr. Leonard Feeney of Boston was correct.
Fr. Leonard Feeney was saying that there are no literal cases of the baptism of desire(LG 14) etc. The red does not refer to literal cases and so could not have been practical exceptions, or even relevant, to EENS.
This means our entire understanding of Vatican Council II has changed. Move over Bugnini and Bea. The Council has gone back to 'the pre-Vatican Council II times'. The 'Conciliar Church' today is traditional and Feeneyite.This is a whopper for the prudent and politically correct within the Church.
It is Vatican Council II which is part of the seismic shift and it is not just going back to Tradition and EENS.The Council has changed before our very eyes.
'The red is not an exception to the blue.' I like that sound.
'The red is not an exception to the blue'. Mama mia! Everything has changed. This is unbelievable!.
-Lionel Andrades

JANUARY 28, 2019
In Magisterial documents the red is not an exception to the blue, the red does not contradict the blue : with the blue there is a hermeneutic of continuity with Tradition (16th- century extra ecclesium nulla salus, the Syllabus of Errors, ecumenism of return, past exclusivist ecclesiology etc)
https://eucharistandmission.blogspot.com/2019/01/in-magisterial-documents-red-is-not.html

I would be interested to know what regular attenders of celebrations according to the 1962MR actually think when they see an Ordo such as this?

When they do not have a second or third collect as Monday to Friday this week do they even notice? What about the anticipated sixth Sunday after the Epiphany when they will celebrate the Saturday Mass of the BVM?

I have a 1947 St Andrew's Missal', with a supplement for Irish Feasts, which means a strong awareness in me of how the 1955-62 changes deeply impoverished the calendar and liturgy. We know where that rationalising spirit led. Ireland has good to moderate availability, but in respect of anything earlier (barring SSPX customs like '62 with confiteor before Communion carried into diocesan '62), there is nothing.