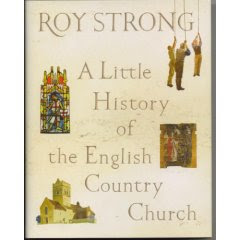 January is the main month for new books. Christmas brings money and book tokens, and these are turned into books.
I have had a few good ones this month: "Sweet Songs of Zion", a series of essays on hymns by John Betjeman; "About the Size of It" by Warwick Cairns, a surprisingly interesting book about weights and measures - anti-metric without being pro-Imperial; and "Spoken Here" by Mark Abley, a book in praise of dying languages everywhere.
.
But the best has certainly been Sir Roy Strong's "A Little History of the English Country Church". The first part retells (with acknowledgements) the story told in "The Stripping of the Altars" but in a style aimed at the general reader rather than in the magisterially scholarly style of Professor Duffy; and the second part continues the story to the nineteenth century.
.
These are churches under threat: they are largely abandoned by the people they were built to serve; the CofE seems determined to split into a series of squabbling sects; and the cost of upkeep of more than 16,000 country churches, many of them Grade 1 listed buildings, is getting beyond anything that the CofE's finances can cope with.
.
I know one large village where the Catholic Mass Centre has been closed and sold, and Mass is said once again in the mediaeval church. That might be part of the solution: Catholics built these churches so that the (seven) sacraments could be celebrated with due dignity. Any place in which God has been made truly present, any place in which a holy relic may still be encased in the altar, has a legitimate call on Catholics; and we have a legitimate call on them.
Posted by Ttony at 16:51

Oh, I would love to get my hands on a copy of that one.

I saw this reviewed in the Catholic Herald-and the review actually put me off; but my dh is interested in it as a follow on to the Duffy.
You think it is a good book? Historically accurate?

Bearing in mind that this isn't a scholarly tome like Prof Duffy's: it's meant for the general reader; and that Strong is an Anglican (though of a high "Catholic" variety); this is a good follow up. Have a lok in Waterstones or Borders.