The New Church At Fatima 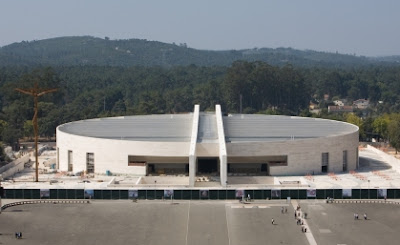 JSarto posted an interesting comment on the new building at Fatima, which he found at Manuel Azinhal's excellent website.
.
My translation:
.
"Looking at the new and old churches at Fatima, the difference between their profiles really stands out. One lifts itself up to Heaven, while the other anchors itself to earth. It struck me that this could explain the difference between the religion of the men who built Cathedrals, and the religiosity of the men who are responsible for these modern buildings. The former did everything thinking about Heaven; the latter have no place in their spirit for anything which transcends the things of the earth. The builders of the former, who worked on the great cathedrals, used to leave marks in the stone of the buildings which could never be seen from the ground: when asked why, they answered, very simply, that it was enough for them that their work could be seen from Heaven.

The difference between the religious attitude which dominates western Christianity today, and the attitude which made the age of glorious Christianity is worrying. Before, men though about God to turn themselves to His Will; now, often, those who turn to God want Him to do their will."
.
Incidentally, Manuel Azinhal has a wonderful post on the significance of the 100th Anniversary of the Portuguese regicide: does anybody know how to copy a PowerPoint on YouTube so that it can be translated into English?
Posted by Ttony at 20:08

It was designed to reduce "certain religious excesses" that were prevalent at the site. Frankly, I wish it was reduced to rubble. The sacrilegious crucifix is a disgrace. I think JSarto is right. The building does reflect a new theology.

EEEWWW! That is one ugly building. I wouldn't use it as a warehouse!
What are these people on!

It looks like a cake that fell on one side. Ugly, ugly, ugly!