You'd think that deciding that it was about time that you read Mediator Dei, instead of just reading about it, you'd end up edified and with a more complete understanding of what the sacred Liturgy is all about.

Instead, you mess up your Triduum by reading that Pius XII wrote this:


But if one desires to differentiate and describe the relationship between faith and the sacred liturgy in absolute and general terms, it is perfectly correct to say, "Lex credendi legem statuat supplicandi" - let the rule of belief determine the rule of prayer.

To anybody who believes (believed?) that Lex orandi lex credendi was some sort of eternal law for the Church, this comment in Mediator Dei will cut you to the quick.  This is why and how any subsequent change could be justified; why any new belief could take precedence over any belief grounded in the Liturgy. Whatever careful point the Pope was making (and I bet I could guess who helped him draft this encyclical), the door was left open.

Here it is in its context 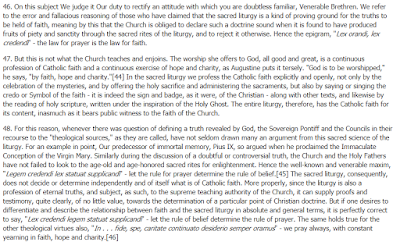 Indeed the whole basis of the reversal of the principle lex orandi, lex credendi meant that any resistance to the reforms could be met with the accusation that the pope was being disobeyed etc etc.

Thank Heaven we are, at long last, starting to see a slow reversal of the last century of papal approved attacks on the Roman liturgy. New Liturgical Movement has more images of this year of the traditional Palm Sunday and we will no doubt see photographs of other traditional celebrations of the Triduum in due course.