.
A while ago, Fr Tim posted some clips of Organum chant, which led me down a merry road of spending money on music I can only listen to on earphones or in an otherwise empty house.

The theory is that "Old Roman Chant" represents the very ancient mode of singing employed in Rome, and which lingered on in the Papal liturgies until the Papacy moved to Avignon, at which point Gregorian Chant supplanted it completely.

Here is a flavour of what has been conjectured as the sound of the Introit of the Dawn Mass of Christmas Day in the sixth century.  If you are like me, it will thrill you to imagine the link back, and to be able just about to imagine the baggage such singing brought with it.  If you are like everybody else chez Ttony, you will marvel at the fact that people will pay money to hear this.  "The closest this will get to my car is the front tyre", as I was told.

The mystery of the Incarnation of the Word lies at the heart of the Christian faith. It is celebrated just after the longest night of the year, when (in the northern hemisphere) the days begin to lengthen until we reach the summer solstice, which is associated with the figure of John the Baptist. To celebrate this moment, the Church deploys an exceptional - virtually uninterrupted - liturgical cycle in which the usual Offices are interspersed with four Masses.

The First Mass begins just after the third hour, that is to say when the sun is midway between its zenith and twilight. Then, amid the final glimmers of daylight, First Vespers of the Nativity are sung. When darkness has fallen, Compline celebrates the first hour of night. After a short pause begins the great Office of Matins, whose solemn ceremonial lasts more than three hours, until the night reaches its epicentre, at this point Midnight Mass is celebrated. As the time of darkness draws to an end, an hour before the first gleams of dawn, begins the Office of Lauds, the two last chants of which - the hymn and the Gospel canticle - must correspond with the arrival of light in the sanctuary. Then the Office of Prime, which lasts only some twenty minutes, introduces Dawn Mass. A short break, and, when the sun is midway between the horizon and its zenith - that is, at the third hour - the Office of Terce introduces the fourth Mass. Between the commencement of the cycle - after the ninth hour on 24 December- and the beginning of the last Mass - after the third hour on 25 December - six hours of daylight and twelve hours of night have elapsed. This geometry of time, which leaves our contemporaries indifferent, constituted for our forefathers the foundation of the liturgical act.

The musical anthology presented here traverses some of the great moments of these four Masses of the Nativity. The music is that of the ancient chant of the Church of Rome, one of the oldest repertories of which traces have remained in the collective memory of mankind. Up to the thirteenth century this repertory accompanied the papal liturgy. It disappeared with the installation of the papacy in Avignon, and sank into oblivion. Rediscovered in the early twentieth century, it aroused little enthusiasm among musicians, and only began to be studied properly first from the liturgical, then from the musicological perspective, in the second half of the century. At this time, to distinguish it from Gregorian chant, it was named 'Old Roman chant'. A major debate took place in the Gregorianist milieu in an attempt to understand why, when since the ninth century, the whole of Western Europe had been using books of Gregorian chant in which the melodic forms are almost identical, the Roman chant books give a different version from the Gregorian chant, often with much more highly developed ornamentation. After a century of research, it would appear today that Old Roman chant presents the Roman tradition in a state closer to its origins. The musical notation utilised is extremely precious, for all the ornaments are written out, whereas in the notation of Gregorian chant ornaments are merely suggested.

At the end of the eighth century, the Frankish kings began to become conscious of their role in protecting the papacy. Pippin the Short, followed by his son Charlemagne, realised that the importation of the Roman liturgy would be a fantastic tool for establishing their legitimacy and culturally unifying a vast and disparate empire. Moreover, in the eyes of the Carolingians, the chant of Rome seemed to be the best preserved musical monument of the Graeco-Latin culture which they wished to revive at all costs. Conscious of the disaster that the loss of the knowledge of the ancients would represent, Charlemagne surrounded himself with scholars and artists who collected what they could of the artistic and scientific remains of Antiquity and attempted to breathe new life into them. The music of Rome was one of the key implements of this Renaissance. The musical terminology elaborated in Carolingian learned circles borrowed numerous terms from Greek theory, which the Franks discovered through the intermediary of the Romans. Thus the Carolingians developed a sensation of being a living part of a certain form of culture whose expression, according to ancient tradition, was Greek. As a result they acquired a degree of legitimacy which buttressed them in their attempts to forge relations with Constantinople.

However, it was necessary to adapt the Roman liturgy to the new liturgical preoccupations which took shape in the course of the ninth century. Successive reforms, and a certain crossbreeding with the old Gallican traditions, resulted in a transformation of the former Roman chant. From this emerged a new dialect known today as 'Gregorian chant'. This chant spread through the Western empire and returned to Rome around the end of the eleventh century, gradually taking the place of the older repertoire from which it was derived. Old Roman chant, whose origins dated back to before the sixth century, continued to exalt the papal liturgy at St Peter's and in the great Roman basilicas until the end of the thirteenth century. The installation of the papacy in Avignon dealt it a fatal blow, and all trace of it was lost in the early fourteenth centurv, when it ended up being supplanted by the chant now called 'Gregorian'.

Like Milanese and Beneventan chant, the other two older Latin repertories, Old Roman chant is situated at the turning point between the music of Graeco-Latin antiquity and that of the Middle Ages. It testifies to a time when the Eastern and Western Churches communed in cultural and spiritual unity.

This programme illustrates the different musical genres in use in the Roman Mass. The chants known as 'Propers' are specific to a particular liturgical time. These are the Introit, the Gradual, the Alleluia, the Offertory, and the Communion. To these are added the chants known as 'Ordinary', here a Kyrie. The art of reading is illustrated by a Gospel sung in the manner still in force in the Eastern churches, whose tetrachordal musical structure is characteristic of ancient Greek music.

For this recording we have used the oldest Roman chant manuscript. It is dated 1071, and is today preserved in the extraordinary collection of the Fondation Martin Bodmcr at Cologny (Geneva).

One must imagine this music in the context of the great Roman liturgies of the first millennium. The glimmer of the candles which makes the colours of the mosaics flicker on the walls, ceiling and the floor long of the basilicas, the movements and the static positions of the officiants the long periods of silence. This music is founded on the art of cantillation, that is to say the act of proclamation and transmission of the sacred texts. On the most solemn feast days, the words were drawn out to extreme lengths so that the faithful might better absorb the meaning they convey. Through the magic of music, sung texts become icons. Time is deployed with sovereign slowness in order to give contemplation all the space it needs and allow consciousness genuinely to settle into the encounter with the Word. The use of the drone, the note held by the lower voices - a form of polyphonic chant then called basilical organum - confers on the sound a hieratic immanence in which time and space are united in a single vibrant truth.

Old Roman chant occupies a central position in the history of music. It is the keystone which gives meaning and coherence to what ought to be the musical consciousness of Western Europe and far beyond. For, looking back to the period before, it gives us the key to the filiation between the chant of the temple of Jerusalem and the heritage of Greek music. Looking forward in time, it enables us to follow and understand the treasures of Koranic cantillation. Outside certain extremely restricted musicological circles, this repertory is today unknown to musicians, ecclesiastics, and the general public. Yet it offers us the oldest version of Graeco-Latin music of Late Antiquity, and represents the missing link between Byzantine, Coptic, Armenian, and Syrian chant, Arab music, and Western music. 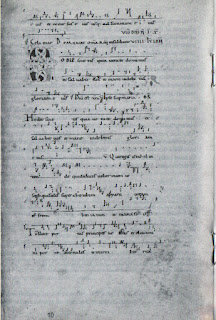 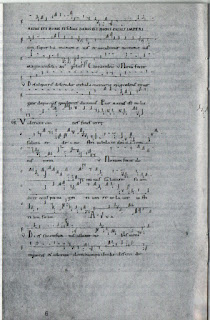 Do get the Peres recording of Baptismal Vespers - that is truly stunning.

This is wonderful; thank you for posting it. There's a slightly shivery quality to it. It reminds me a little of the haunting chant we heard from the Eastern Catholics at the funeral of Pope John Paul II. I had from that, and from this, a feeling of reaching back, further than mere words can achieve, into distant and ancient time .

Dorothy got it spot on - a "slightly shivery quality".

"Old Roman Chant" is something I've never experienced before, and it's absoulutely marvellous.

Many thanks for posting it!

The universally-adopted Solemnes-style Gregorian chant has been heavily criticised (not least by Card. Bartollucci) for its lack of muscularity. Perhaps this is the antidote. I can imagine, if I'd heard it a few years ago, that I'd have thought it sounded "Eastern". Today it's obviously and unmistakeably western and Latin, but with a family resemblance to the Byzantine tradition.

Must get some more of this!

Beautiful. Any idea where one can get access to the written chant? Or is it only available on CD to listen to?

It's great to listen too but I'd prefer the gregorian in the Liturgy. This certainly is a big attention grabber but that is the very problem. Although maybe I just find it so because I'm not used to the style.

I loved it too.
I'm just back from a pilgrimage to The Holy Land and I can certainly hear echos of the sounds I heard on that visit.

Now THAT is cool. I should like to lay my hands on a score and learn it. How old are the earliest known written scores?