No Posts For A Few Days

Bishop Williamson Apologises To The Vatican!

.
According to La Cigüeña de La Torre, Bishop Williamson has written to the Vatican apologising for the damage caused by his imprudent statement; the tone and the content of the letter have been a very pleasant surprise.

Bishop Fellay And Doing The Pope's Will

.
Even those of us who think that he is "Top Pope" are astounded by the brilliance with which Benedict XVI handles those who might be described inaccurately as on his right or his left.

I wonder if Alastair Campbell is reading Catholic websites and blogs thinking "Gosh!" (Alright, it wouldn't be "Gosh!" but you know what I mean.) "Gosh! This bloke knows how to reconcile one set of wanabee enemies by using the calendar and language of his real enemies!"

By using the inclusive language of the version of Vatican II peddled by the Church's internal opposition, the Pope has pulled the rug from under anybody who wants to attack the decree of lifting the excommunications from a Catholic point of view.

And, heroically, Bishop Fellay, has now forbidden Bishop Williamson from commenting further on politics or history and has asked forgiveness of the Pope and of all men of good will - those outside the Church whom Vatican II might reasonably have been said to have addressed:

The world is turning fast: this is great!

I wonder if His Holiness has been thinking about Westminster this week; you knw, while he's on a roll ...
Posted by Ttony at 19:54 No comments:

New Translation And Setting Of Psalm 151

.
Thanks to David Schütz. 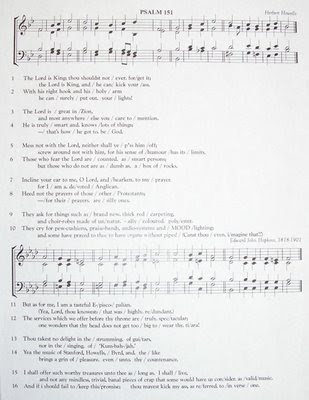 On Seeing A White Tie With A Dinner Jacket

.
Simon Heffer reacted in the Telegraph to the photo of President Obama wearing a white tie with a dinner jacket by saying that he looked a bit of a cad. I think it's a clear sign that the United States is about to get a taste of we have had since we voted for Blair in 1997 (and saying you voted for his opponents is as useless in the American case as in the British).

President Obama signalled what he thinks about tradition: that it means whatever he wants it to mean. There was something vaguely heroic about Gordon Brown's refusal to wear white tie at all at Livery dinners: he would wear a business suit as that was the "smart dress" of what he liked to pretend was his class; "these are smart clothes even if they aren't the smart clothes you expect me to wear". But the belief that he alone is the arbiter of what is or isn't smart for him to wear at a ball, puts the President into a different class. And that class is Nulabour's, and, dear American friends, you are about to go through what we have endured for ten and a half years. The Leader becomes the Dear Leader through the effort of his spin doctors who know how right he is because they believe in (well, want) the same things he does.

Wait for the construction of a narrative: "for too long the country has suffered under a fairly well meaning but weak leader who, like his party, was in thrall to non-elected outside interests such as big business. The country has voted not only for generational change, but for a decisive change in the sources of authority for the way we live". Blair 1997 or Obama 2009?

Wait for the opinion polls which proclaim that "religious America" is no more (based on a questionable interpretation of an opinion poll which is deliberately ambiguous); wait for a reiteration of the definitiveness of Obama's complete wipe-out of McCain; wait for a new statement that the Freedom Of Choice Act isn't extreme, but just a statement of where the American people are at.

A Thought About The Consequences Of Bishop Williamson

.
If one of the consequences of having the SSPX back in the fold has to be forcing Bishop Williamson either to be a Catholic Bishop or leaving the Church, does that mean that, for reasons of balance and fairness, the same requirement can be made of Bishops who have other wild and heretical ideas?
Posted by Ttony at 16:19 2 comments:

"Have you any idea why your blog is providing me with a pop-up ad for Ladbrokes Bingo even though I've disabled pop-ups?"

Well, the answer was probably the Tony Hart YouTube link. Who has done What?!
Posted by Ttony at 20:56 10 comments:

It Was The Antivirus!

.
Having rebuilt the computer several times, the only thing that makes the machine behave like the first machine I connected to the Internet from 14 (good grief!) years ago (ie 2.1 kbps is a good speed), is the updated, fully paid for, anti-virus software.

Normal service will (DV) shortly be resumed.
Posted by Ttony at 20:41 2 comments:

.
In between what feel like Stakhanovite efforts to make the PC connect to the internet at something better than 1.6 KB (yes, that's a K!!!), I use various means to flit around the blogosphere like a butterfly, alighting here and there for a second or two before moving off somewhere else.

The mood in the blogosphere in Catholic England and Wales seems to be shifting quite a lot: is it just me, or are we becoming radical?
Posted by Ttony at 20:17 1 comment:

The Land Without Irony

.
The German Chancellor has announced today that one of the ways in which Germany will work its way out of the current recession will be a major programme of public works, focused on building roads and motorways.
Posted by Ttony at 19:46 No comments:

The Fullness of Faith is a blog I used to follow by David Palmer, a former Anglican Vicar now trying to balance life as a working man and seminarian. It's back, here, David presumably having learned to balance two jobs and find time to be a blogger as well.

He is going to be focusing on Islam this time round, rather than on being a recent convert; it could be fun!

Putting Me To Shame

.
Elizabeth thought that what might be needed in Arundel and Brighton was prayer: prayer for the Bishop. So she has set up a blog here to do just that.

What a nice thing to do! And what a good thing for her, Bishop Conry, and the Diocese!
Posted by Ttony at 21:17 2 comments:

.
In an mediaeval cathedral this afternoon just as the choir was processing in for Evensong I noticed a bunch of six or seven men enter. As the soloist began I became more and more aware of the noise they were making. They were North Africans, most likely Libyans but maybe Egyptians, and making a lot of noise by speaking at a normal pitch in Arabic. One was wearing a hat. They tried to get through to the choir stalls but were stopped by an elderly gentleman who gave them to understand that they should leave. I got close enough to be able to help if things should turn nasty, but after a moment, one of their number said something and they trooped noisily back down the aisle and left.

What was curious was that their manner was exactly that of a group of men I once saw who had taken over the lease on a workshop and had come in to work out what would go where: a sort of "measuring for curtains".

This Christmas break has been particularly relaxing, not least because I have only been into work once since 23 December, but I took today's incident to be a sign that the real world is forcing itself back onto my radar screen. Ho hum!
Posted by Ttony at 17:33 2 comments:

.
Yes, I'm there already, having been to the Vigil Mass.

.
Wilson, Keppel and (briefly) Betty. All names from a world which has disappeared. This is a proof, though, that not everything about the past is automatically better than everything modern. Enjoy!