.
They aren't adult films. If you have to categorise them by human development, they're adolescent films. 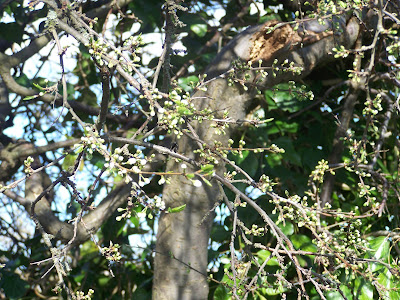 .
The mayflower will be out this week. 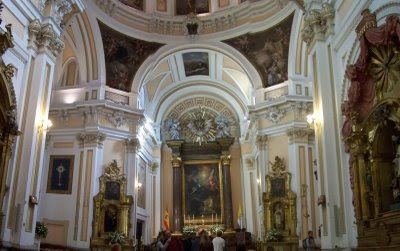 Yes. This is the Cathedral of the Spanish Archbishop of the Armed Forces.

There is a side chapel in which the Blessed Sacrament is reserved for worship.

I wonder what the Cathedral Church of the Bishop to the Armed Forces in England and Wales looks like: not quite like this, I imagine. 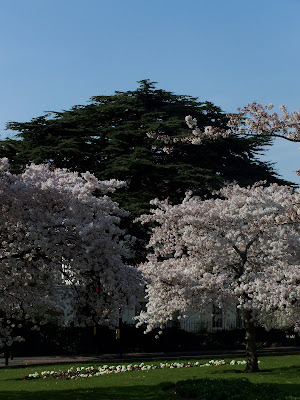 Yesterday, cherry trees framed very old cedars and everybody was in shirtsleeves.

Today, it has turned really, really, cold*, and tomorrow I'm up at the crack of dawn to go away for a couple of days.

This is what I'll remember, though.

.
Something has been nagging away at me, all the more so this week as Cardinals have started to speak out against the Church's teaching on abortion.

The answer to what it was is a recent post by Rita which has been busily fermenting in my subconscious as I try to get my mind around it. She looks at the message about the state of the seven Churches that God dictates to St John at the start of the Apocalypse, compares it to the state of the Catholic Church today, and suggests that as sinners, each of us shares a degree of responsibility for what is happening, and that this passage might help us pray and concentrate on what we ought to be doing.

For Ches: The Royle Family

.
He wants cheering up.

The day after my mother died I had to go to where she lived to occupy the house, as, if it was left empty, it would be raided as soon as her death notice appeared in the Manchester Evening News.

It was a good time for my siblings to retreat into their own families: they had discovered her body; and I was happy to be left alone pottering, finding what needed to be secured and starting to sort the house out before visitors started dropping in.

After a hard day of it, and listening to drug dealers shooting at each other, I decided to stop for the evening. I rang home and spoke to my own wife and children, and then went to see what was in the freezer and cooked something for dinner, got a bottle of wine out of the garage and settled down in front of the TV to fill my mind with whatever rubbish happened to be on.

But there wasn't any rubbish on: there was an episode of the Royle Family. Only a few days before I'd told someone at work that I could barely hear a sentence on that programme that I couldn't imagine hearing at home from one member or another of my family. So I watched and laughed.

About ten minutes in the 'phone rang. It was an Auntie (actually the widow of a second cousin once removed, but that counts as Auntie) who was ringing to offer condolences. If you can remember Phyllis off Coronation Street you can imagine the voice, but this Aunt had got through more Park Drives and gin than Phyllis ever had.

I'd turned the television down, and the first thing she said coincided exactly with Nana saying something on the programme, completely inaudibly to me, because of the nicotine- and alcohol-induced rasp in Auntie's voice. And she stopped just as Jim Royle asked: "What is the stupid old bugger going on about now?"

Imagine that you are talking to your godfather's widow: she is as hard as nails; in spite of that she is cut up; and you start killing yourself laughing. How do you get out of that?
Posted by Ttony at 20:38 2 comments:

.
I have been following Fr Clifton's fisking of the writings of a Mgr Basil Loftus and am becoming more and more bemused that the man is allowed to peddle heresy in a newspaper which is sold in Catholic Churches.

I feel at a bit of a loss where this is concerned: once you bought the Universe (Catholic Daily Mirror), the Catholic Herald (Catholic Broadsheet), the Tablet (Catholic Staggers) or Ireland's Own (Catholic People's Friend) at Church, confident that you would never read a word which couldn't have been praised by any Pope currently or formerly gloriously reigning, and that you were contributing income to the parish.

Today I can buy the same as before, plus the Catholic Times and the Irish Times, but have no idea at all what level of virtue or theological exactitude they might contain, nor, given the quantities that seem to lie about, what the financial model on which their contribution to parish income is based.

(We can't expect our clergy to read through all of the Catholic press each week to be able to ensure that it provides fit reading for their parishioners, but it might help if they either established a top shelf for the Tablet and Catholic Times, or just decided that Catholics might be able to do without.)

I can't read the Tablet; the Universe is turning into parody; I thought the Catholic Times was just an anti-Herald spoiler but begin to wonder what it's really all about and if it's much worse than that; and the Herald, while mainly OK is nevertheless happy to feature all sorts of ne'er-do-wells, and Fr Rolheiser every week.

After twenty-something years, I haven't renewed my Spectator subscription when it fell due last month: I'm in the market for something weekly, challenging, intelligent, topical and Catholic. Any ideas?
Posted by Ttony at 19:53 5 comments:

.
The new Prefect of the Congregation for Divine Worship and the Discipline of the Sacraments, Cardinal Antonio Cañizares Llovera, was, until recently, Archbishop of Toldeo.

H/t to La Cigüeña De La Torre whose figures about other Spanish Dioceses are worth thinking about.
Posted by Ttony at 20:12 1 comment:

.
He was here last week. He talked to people, sniffed the air, took the temperature, read the newspapers ...

... and this week, we have no announcement of a new Archbishop of Westminster; we have Birmingham and Liverpool outdoing each other to do things that say "Not me!"; we have the Bishops' Conference statement on the Pope's letter to Bishops; and we have the latest rumour which says "not before Easter".

Pellism: forcing liberals to show themselves as they are.

Where did His Eminence stop over on his way back to Oz?
Posted by Ttony at 20:02 No comments:

The Last Thing I Would Have Expected!

.
You see, I make all sorts of assumptions about things I really don't have the first idea about. I try to hold my tongue (and pen, and fingers) but sometimes I end up making a statement about something based entirely on prejudice.

Now, private education in France is something I really don't have the first idea about; and private education in France in schools run by the SSPX, Archbishop Lefebvre's lot, is a book even more firmly closed. But if you'd asked about sport in such schools, I would have opined that it wouldn't be a particularly high priority, and that it would have been based on field sports. Why? Ignorance! Complete ignorance.

Just look at the advert for a rugby competition which I found here!
Posted by Ttony at 20:11 4 comments:

Interviewed And Turned Into A Roman Numeral!

.
I had a surprise e-mail - a request by somebody who interviews bloggers to be interviewed. I can only wonder how many people on the list ahead of me had said "No". If anybody is interested, the interview is here, on Paul Burgin's blog.
Posted by Ttony at 19:38 2 comments:

.
I never joined the LMS for many of the same reasons that I have never attended an SSPX Mass: I have never been half so sure of anything as some of the chaps in charge of those organisations seem to be of everything. Latin seemed to be not just a shibboleth, but a fetish. And, as Michael Davies once pointed out, but the LMS never seemed to acknowledge, there really was a need for a reform of the celebration of Liturgical practise at Vatican II: most Catholics only ever attended Low Mass, almost never heard Gregorian Chant, almost never participated in celebration of the Divine Office.

Old Nick must have the equivalent of a satisfied grin on his face at the moment: Williamson has separated any hope that the SSPX might swiftly be reconciled to Rome; the South African Bishops seem to have mangled the introduction of a translation into real English of the Roman Rite (instead of the translation into Trite that we have endured for 40 years); and now the LMS seems singlehandedly to have offered "liberal" "Catholics" a major weapon with which to attack Tradition in England and Wales, just as they were losing the argument.

"O God, who bringest wars to nought and shieldest by Thy power all who hope in Thee, overthrowing those who assail them; help Thy servants who implore Thy mercy; so that the fierce might of their enemies may be brought low, and we may never cease to praise and thank Thee."
Posted by Ttony at 20:24 3 comments:

.
I was reminded by a French site here that Summorum Pontificum said that Bishops should report to the Vatican after three years and say what had happened.

SP was issued on 7 July 2007, which means that we are half way through the three year period. Would anybody agree with me that it might be helpful to our Bishops if we made them an offer to help them prepare their report in eighteen months' time with a parish by parish report of what has happened since the Motu Proprio?
Posted by Ttony at 19:51 No comments:

Blogging is very light at the moment, due to an invasion of real life. Some big family things have hit just as work has demanded a lot of travel. More to come.
The weather's good, too! 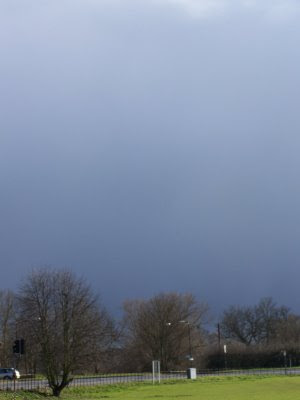 .
In this week's Catholic Herald I read, in the Schoolboard column an article which began by reiterating that the Church teaches that raising children is a three way partnership between family, school and parish. This has been niggling away at me for a few hours until I finally realised why: what happens if there is a fourth party, who is pulling two of the others in a bad direction.

There is nothing wrong with most Catholic schools; quite the reverse: most are excellent. But who specifies their RE syllabus and what does it contain?

There is nothing wrong with most parishes, but there is, throughout England and Wales systematic if low level abuse of the rubrics; stuff like invented prayers, unscripted interpolations, ad lib variations on litugical forms, lay people purifying communion vessels; I could go on! Who is responsible for maintaining the standard of the liturgy in the country?

Cardinal Pell, in another context, got it spot on:

What do our Bishops actually stand for? I know they are very busy dealing with poverty in the Third World, global warming, and the plight of Palestinians in Gaza, but, in their spare time, what sort of Catholicsm do they believe in? What sort of Catholicsm do they want to foster in the young? Is what we've got what they want and what they've worked for?

Perhaps he ought not to be so mystified.
Posted by Ttony at 17:51 No comments: