A Reflection On Calendars

.
If you are reading this, the chances are you are aware of my increasing conviction that the changes to the structure of worship, instituted by Pope St Pius X in Divino Afflatu, which began in 1911 were disastrous for several reasons: the complete reversal of the relationship between the sanctoral and the temporal; the idea that the Liturgy was a mutable object, able to be changed on a whim, instead of an immutable reality; the role of the Pope as autocratic ruler which no longer obtained across the Papal States being transferred into the inner life of the Church; the encouragement given to that wing of the Liturgical Movement which thought that lay participation in the Mass meant giving lay people things to do in, or at least during, Mass.

The more I study what happened, the less I understand how what happened actually came about. The changes happened because the Office was perceived as so burdensome to priests, especially priests in parishes who had other sacerdotal claims on their times.  Hold that thought for a while: the calendar had to be changed for the whole Church because the daily Office was too much of a burden for some priests.

A look at parish life in England and Wales during the fifty years preceding Divino Afflatu shows that there was a rich liturgical and devotional life available for lay people in their parishes: Mass on Sundays, of course, but also catechism and instruction classes, Vespers and Benediction; parish Sodalities and Fraternities to encourage regular prayer; and a clear sense of cradle-to-grave practice of the Faith.

From the point of view of a parishioner, the priest’s role was pretty clear: it was completely set apart from the role of the laity, involving, as it did, knowing how to offer the Sacrifice of the Mass and being ordained to do so; celebrating the other sacraments; teaching the Faith. Priests were set apart: even when from the people, not of the people; educated, but not for matters of this world. The Office was theirs.  Parishioners would be aware of Vespers, for many parishes celebrated Vespers as a Sunday evening devotion (a taste of the Liturgy for those forced to work at a time when there were no anticipated Masses on Saturday evening, or Sunday evening Masses). Those attending Cathedrals would possibly be familiar with the celebration of Terce before major Masses, and may have come across other parts of the Office while waiting for Confession. But otherwise, the Office was something the priest said, possibly wandering about parish grounds, possibly seated in the Sanctuary, lips moving soundlessly.

How burdensome was it? There’s no way of knowing. Unlike today, the priest wasn’t hemmed in with a burden of non-priestly duties imposed by the state and the diocese. From Health and Safety at one end, to attending Safeguarding courses at the other, today’s priest has far more things to attend to outside Church than did his predecessors. But the fundamental reason for the question’s being unanswerable is lex orandi lex credendi: the fact that priests stopped praying the Office the old way has changed the Church into one where the old way is no longer imaginable as part of normal praxis.

This is one of the reasons why the 1962 Missal and the 1960 Breviary can be touted as part of a solution to the Church’s problems: simply because they represent a way of doing things that can still be remembered, at least by people in their sixties or older, as normative.  Yet the fact that most Masses are celebrated in Green, instead of Green being almost as rare as Black, would be a visual assault on anybody who had attended Mass before Divino Afflatu. The idea that there could be a maximum of three collects in a Mass would be bizarre. And if our time traveller from 1910 attended EF Mass on Sundays in 2020, and asked why there was only one Last Gospel, he would be looked at as though he had lost his senses: surely everybody knows that only at the third Mass on Christmas Day can the Last Gospel be other than In Principio. Look at this comparison of the time since Christmas (clicking on it should make it legible): 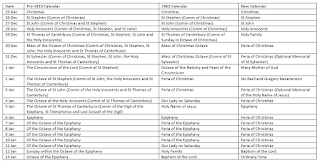 How can anyone say that the worshipper in the pew simply wouldn’t have noticed?

The crisis in the Church goes, of course, much deeper than the Calendar, but its origin, I am increasingly convinced, is in a Pope who was persuaded that the practice of the Church—perhaps the Church itself—was something for him to control actively and directly.