A Recommended Podcast From Father Z

Hearing the Canon in a new translation is a much bigger deal than I had expected; it is completely different from reading a translation (or the Latin) while the priest is talking.

I hope the catechesis picks up on the richness of the fare on offer and doesn't try to explain it away.

Most of all, I hope that the Bishops encourage priests to use this opportunity to evangelise: the whole of God's religion is contained in this six or seven minutes.  Think what a holy priest might do with it; think what a country full of holy priests might do with it!
.
Posted by Ttony at 20:16 1 comment:

How To Respond To The Abortarium Advert On Monday

.
Boycott all of the products advertised during the same commercial break, and write to the companies concerned telling them why.
.
Posted by Ttony at 16:20 1 comment:

On Not Joining The New Altar Servers' Organisation

.
I understand that a new Altar servers' Sodality was set up last weekend and that details are available here.

I'm not joining.  I joined the Archconfraternity of St Stephen forty-five years ago and I use its 1962 Handbook to this day when I serve.  There is no reason to set up a new organisation, other than in an attempt to gain some form of "ownership" of the Extraordinary Form in the Church in England and Wales.

I'm not a member of the LMS either, for similar reasons.

And I normally attend OF Mass, even when I know by whom and how it's going to be celebrated.

Anything which tends towards the fostering of disunity ought to be shunned.

What's all this about?  This was in response to what I think was an intemperate message telling me (as it seemed to me) that I had to join this Sodality if I were to be considered a "real" 1962 EF Mass server.  I responded "assertively" and was then made aware that those attending OF Mass when EF Mass was easily available were not considered necessarily suitable for serving at EF Mass.  Lots of paraphrase here!
.
Posted by Ttony at 20:18 10 comments:

Preparing For An Anniversary

For various reasons, I am involved in preparations for one celebration of the 70th Anniversary of the Battle of Britain (as are so many other people and organisations!) and I have had a curious insight.  I reckon that most of us who were born between 1945 and 1960 are as affected by the Second World War as though we'd lived through it.

We eat everything that's put in front of it; we don't make a fuss; we accept that not everything will work as scheduled; our upper lip is stiff; we don't expect that things will ever be perfect.

We were brought up by people who were formed by military service and by rationing.  Military service was reflected in a profusion of clubs, socieites, sodalities and guilds in which there was a hierarchy of posts up which one could ascend; in an expectation that the Man in Whitehall could behave as though he knew best; in politeness, deference and civility; in queueing.  Rationing was reflected in awful food: you cooked what you were given, out of what was available.  Meat was always overcooked because that way any iffiness (whether of source or freshness) might be overcome; food served at restaurants was "fancy", because the link between how you ate at home and how we had always eaten was lost; egg and chips became an option for a meal.

When we were little, our parents expected that we would end up being called up, and we'd end up fighting the Soviets; so discipline mattered, because it would make the transition to Basic Training a tinier bit easier.  "March nicely, boys" to a playground full of infants.

And that meant that our end was nigher, and that we ought to prepare for the Last things first.  A class of seven year olds singing "Dear St Joseph Spouse of Mary" would bellow out the chorus "Teach, O teach, us how to die" and our parents would be glad we were learning how to prepare ourselves for what was coming.

Every time the Nazi says "Good Luck" to Gordon Jackson, and he replies "Thank You" during "The Great Escape", I know what side I'm on, and have been on since ever I can remember, and why.

And I feel the most curious nostalgia for a time I cannot possibly remember.
.
Posted by Ttony at 20:27 9 comments:

A Service For Europe

.
I hope to goodness that Rocky Horror Paraliturgies aren't a part of the Anglican Patrimony that the Ordinariates will keep.

Look at this write-up here and if you want the full horror, look here.

Keep Your Hand On Your Ha'penny

.
Not advice about economics.

When I was about 13 or 14, there was nothing more embarrassing than hearing my Grandmother and her friends singing this song.

Nowadays I can only marvel at them.

We Want Our Trophy Back

We had something; somebody has taken it away; we want it back.
.
Posted by Ttony at 19:24 1 comment:

.
According to the stork on the tower, Cardinal Re will be replaced by Cardinal Pell as Head of the Congregation for Bishops, the announcement possibly being made this month, but if not certainly in June. 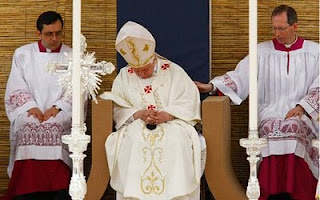 Indignor quandoque bonus dormitat Homerus - one of the scraps of the classics I still remember without having to look it up.  (Add Loeb editions, with the Latin on the left hand page and the English on the right to a good memory and you're half way to a JMB GCE O Level.)

It's the concept that counts, though.  Most of us get all sort of things wrong, and all of us get at least the odd thing wrong.

And you'd have to be the most extremely ultramontane supporter of Pope Pius XII, and the date about 1950 if you wanted to try to suggest that the Pope never gets things wrong.  But he does.

One thing was the appointment of Cardinal Murphy O'Connor to the Congregation for Bishops.  It might have felt like a nice consolation prize to soften the blow of leaving Westminster, and to Archbishop Nichols at that, but it's more important than a sinecure.  Every time the Nuncio comes up with a suggestion for a new Bishop for England and Wales (or, I assume, for Scotland too), there's CMO'C able to explain in great detail exactly why the Nuncio has got it right, just how sound a man the candidate is, and just why he's exactly the right Bishop for that See at this time.  And nobody else in the Congregation can answer the arguments, because the premisses have been stated by CMO'C as axioms and nobody else knows the Church on the ground in England and Wales well enough to argue.

It would be great for us if Damian is right, and Cardinal Pell is to take over as Head of the Congregation for Bishops, because his influence will trump that of CMO'C.  But how many other superannuated Cardinals are being given posts like this, where they exercise significant influence whilst carrying no formal responsibility?  And in which Congregations?

Once their resignation is accepted, off they should go.  There is plenty of pastoral work to do if they want to remain active as simple priests, or they can write their memoirs, or they can retreat quietly to make their souls.  But away, please!
Posted by Ttony at 15:25 3 comments: