.
At the 1980 National Pastoral Congress in Liverpool, Sector B, Topic 3, under the chairmanship of Mr David Hobman proposed:

"...adaptations must be made in anticipation of the growing shortage of priests.  Domestic litugies must be encouraged and lay people must be trained to offer leadership in those liturgies where the priest's presence is not essential and which do not involve the celebration of the Mass.  These celebrations have the advantage of encouraging joint Christian worshop and what we can do together should be done on an ecumenical basis."

Countercultural Father has posted here about plans for the Archdiocese of Liverpool to have lay-led funerals.  Mac had posted about it earlier, but I'm afraid it slipped me by.  Ben also pointed out that courtesy of Part Time Pilgrim, he had found a copy of the Archdiocese's leaflet on how to plan a Catholic funeral here.

It's this last that worries me.  I get all of Ben's points about why a lay-led service is always going to be second best, but what surprised me was that the Archdiocese seems not just to be unaware of, but directly in opposition to a Catholic idea about how to bury somebody.  My source is the GIRM: the General Instruction of the Roman Missal, which is the Catholic Church's book about how to celebrate the Mass.

The GIRM has a section on Masses of the Dead.  It contains the following:

"The Church offers the Eucharistic Sacrifice of Christ's Passover for the dead so that, since all members of the Church are in communion with each other, the petition for spiritual help on behalf of some may bring comforting hope to others.  Among the Masses for the Dead, the Funeral Mass holds first place.

Pastors should, moreover, take into special account those who are present at a liturgical celebration or who hear the Gospel on the occasion of the funeral and who may be non-Catholics or Catholics who never or rarely participate in the Eucharist or who seem to have lost the faith.  For priests are ministers of Christ's Gospel for all."

"The Funeral.  This is the community's main celebration and prayer for the deceased person.  This could be a Funeral Mass, but if the majority of the mourners would not be able to participate fully in a Mass, or if no Priest is available, it may be a Funeral Service led by a Lay Funeral Minister or a Deacon.  It cannot be guaranteed that all the deceased's wishes will be fulfilled, even where a pre-paid funeral plan has been arranged."

(NB, by the way, the use of capitalisation, and the order in which "Lay Funeral Minister or a Deacon" is set out.)

Another contrast comes between the GIRM:

"At the Funeral Mass there should, as a rule, be a short Homily, but never a eulogy of any kind"

and the Liverpool Rite:

"The family and friends of the deceased can be involved, if they feel able, in a variety of ways:

Speaking briefly in memory of the deceased person."

The leaflet is, it seems to me, scandalously heterodox, and I commend it to you all for meditation and reparation.

Given, however, where it comes from and what it proclaims, it is worth highlighting something that I found hilarious.  It says that "the use of music in the various stages of the funeral is important, and carefully selected hymns and music will enhance the service, bring back memories of a loved one and provide consolation for the bereaved."  It points out that "some music (or words) which would not be appropriate for use in church may be better suited to the crematorium or cemetery" - not that Robbie Williams' "Angels" should not be banished from any religious celebration whatsoever, but just from the Church (or rather, church) part, if there is one.  But buried between those two quotes comes:

"It should be borne in mind that the Catholic Church has a vast library of music to suit all needs."

Indeed it has, and it is one of the great scandals of the Age that the people who wrote this leaflet have condemned Catholics of the last two generations never to have access to this Library, and have done their utmost to destroy it, and the context for which it was written, as completely as possible.  The irony that this has issued from the Metropolitan Cathedral of Christ the King - Paddy's Wigwam; the Mersey Funnel - will not escape some of us.

A Window Closes - Some Good News

It turns out that the lecture by the well known tabletista gay-marriage supporting Catholic theology lecturer Tina Beattie, who had been asked to speak in Clifton Cathedral to celebrate the fiftieth anniversary of Vatican II, has been cancelled. 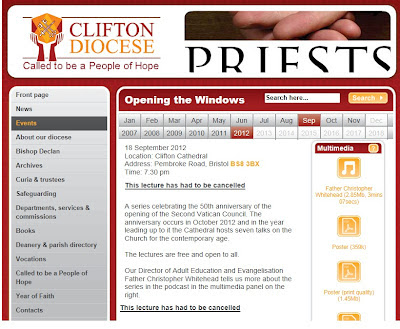 This is very good news.  H/t to Countercultural father who spotted it first.

Might we dare to hope that by adequately publicising, and well in advance, goings-on of this sort we might see at worse more cancellations, and at best a reduction in invitations to heterodox Catholics to preach as though their beliefs were mainstream and Catholic.