.
My normal attitude to spam is to delete and move on, but anybody who asks me to post something and helpfully sends the HTML ready compiled﻿ earns a brownie point.
The second brownie point comes from the subject: anybody asking me to advertise a retreat deserves a plug.
There might have been a third point for an EF Retreat at Douai, but as I'm too old to be allowed on it, they don't get that point.
They only needed two, though. 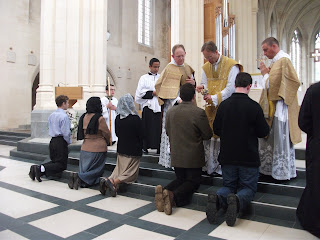 
During the weekend of the 9-11 September 2011. Young Catholic Adults will be running a retreat at Douai Abbey, it will be led by Juventutem Ecclesiastical Assistant Fr de Malleray . The weekend will be full-board.

* YCA will have half of the retreat centre to itself
* There will be a Marian Procession, Rosaries, Sung Mass, Low Mass, Confession and socials
* Fr. de Malleray FSSP head of Juventutem will preach the retreat, Masses will be in the Extraordinary form

Prices range from £5 to £51 per person per night . There are 3 options

Friday , registration from 4pm, to Sunday 11th September (full board)* or
Arrive Saturday morning till Sunday or day only
51 pounds full-board PER PERSON PER NIGHT
25 pounds for students/low waged/unwaged (or whatever you can afford) PER PERSON PER NIGHT

£35 PER PERSON PER NIGHT (full board). Self catering £25 per person per night (reductions for students:- or whatever you can afford) .

£5 PER PERSON PER NIGHT (or whatever you can afford - please bring your own tent and food ).

If you would like lunch on Sunday 11th then it will be an extra £7 each.

How to book - limited places so please reserve your place early

To reserve your place FOR THE WEEKEND (no deposit needed if you are coming for the day on Saturday), please contact the Guestmaster direct and send a 20 pound deposit (NON RETURNABLE) to Brother Christopher Greener OSB, Douai Abbey, Upper Woolhampton, Reading, Berks. RG7 5TQ (please make any cheques payable to Douai Abbey). Please mention how long you wish to stay and any special diet.

For general enquiries about the weekend:- or any queries about the accommodation/location/lifts required please ring Damian Barker on 07908105787 or 01452 539503.

Not here, and not at my other one either.

I don't know what this means.

81%How Addicted to Blogging Are You?
Created by OnePlusYou - Free Dating Site

Is The Church In E&W Ready For Fr Hunwicke

Fr Hunwicke, it seems to me, is an embodiment of the Anglican Patrimony some of us would love to see the Ordinariate bring as its gift to the Church which finally can fully embrace its members.  Erudite, witty, feline; rightly aware of the gifts he has been given, but humble in their application; tolerant of men if not of their opinions; and rooted in an ecclesiology which has sought Rome for a century and a half while maintaining the fruits which have grown from the soil in which their stock was planted.

That I now own and read books by Thurston, Dix, Bishop and Gasquet is due entirely to him.  It was through reading his posts that I realised how unaware I really was of the History of Catholicsm.  (What would it take to pull his posts together into a book?)

I hope that he will just carry on just being his online self after the next few weeks have passed.  I ca't help wondering how ready the Hierarchy is for what is coming.
Posted by Ttony at 19:58 2 comments:

I asked one of the priests - the youngest, actually - I serve for in the EF why he didn't allow a dialogue Mass.  Quite a few of those who attend know the responses and were keen to join in but he has stopped them.  His answer illuminates another of the problems with the OF.  He wants people to pray the Mass, to unite themselves with what he is doing at the altar, and not to be constantly doing things, or preparing to do things, or to be working out when they'll next have to do things.  "That's what the server's for."

Even to say the people's part at my own pace instead of at the slow unison pace of the loud people is enough to get flashed black glares.  Unison is somehow believed to be next to holiness, even if it ruins the sense of what's being said:

Our Father
Who Art in Heaven
Hallowed be Thy Name
Thy Kingdom Come
Thy Will be done
On Earth as it is in Heaven ...

Deeper than that, though, is the problem that if I'm saying those words it's unlikely that my mind can continue whatever meditiation it was pursuing during the Canon of the Mass.  The price of spending large parts of the Mass saying things is a two dimensional "participation" that forces me to do one thing, the same thing as everybody else, and not to do anything else.

This is another of those things that has radically changed the relationship between Catholics and the Mass, and not, I fear, for the better.
Posted by Ttony at 17:35 1 comment:

An Analogy Sets Me Thinking ...

A movement which started after WWII, and which gathered pace during the fifties took off in the sixties and by the early seventies had carried all before it, leaving us a much impoverished bunch.  I refer, of course, to metrication. 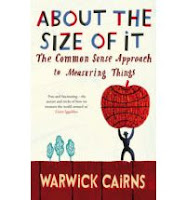 Rereading Warwick Cairns book about the origin of traditional, pre-metric measures, and where they came from, their links back to to the distant past, leads one to an inevitable and clunking analogy about the New Mass: it's fine, it does the job, but it's a dimension short of what we had before.  It's all very well that a kilometre is (well, isn't actually, but what the heck) a ten millionth of the distance between the North Pole and the Equator, but a mile is two thousand paces, and an acre is ten furlong strips ploughed, and a brick is a hand's breadth, and shoe sizes are measured in barley corns.  (No, I won't!  Buy the book - it's brilliant.)  And just to finish off the analogy, the crying shame is that the change was introduced just as any justification for its being necessary disappeared: just as universal literacy meant that anyone could follow Mass in an English-Latin Missal, so the electronic calculator made the introduction of the metric system unnecessary.
But hey ho!  Metric does.  If you go to the supermarket, there is a suspicious number of joints of meat weighing in at 900 grams, 1.2 kilos and so on: it's all still being done in imperial: they're just not letting on.
But a kind soul showed me James Preece's rather good article in the Catholic Herald against Children's Liturgies, and a sentence he chucked in about the precipitous decline in Catholicism in England and Wales being due to execrable catachesis (my words) made me realise that the analogy might hold a deeper message.  I can cope with metric because I keep translating.  A 1.2 kilo joint of pork is three pounds, so it does for 3 x 30 minutes plus 30, whereas if it were beef it would do for 3 x 20 plus 20.  No matter how the meat is packaged, I cook it in imperial.
My children however, have no concept of measurement as something instinctive.  They did calculations in metric at school, and hear imperial at home but have no concept of what the terms mean in any meaningful sense.  The radical disconnect with the old system has bothered me, but not too much as I can translate.  They don't know how to because they haven't absorbed either system except as an intellectual exercise and at a shallow level.  Their children will only ever understand one new system (and will be more deracionated and therefore poorer for it) and it will be the new one, but taught to them not by their family in the context of their environment but as an arbitrary external absolute.  It will measure things for them, but it will separate them from their past.
I'd love someone to explain to me why this analogy is wrong if applied to the New Mass: that the heritage of the ages, the hermenwhatsit of thingummybob, is just as rich in the new as in the old, and that what I (taught by people, it has just struck me, who possibly never uttered the word "liturgy" in their lives) learned by the time I was eleven, will be understood at all by those teaching my grandchildren and great-grandchildren.
Posted by Ttony at 19:34 6 comments:

From The Mother Of That Lot 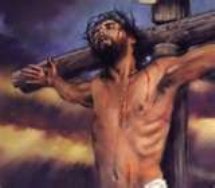 There is a great deal to gain and absolutely nothing to lose!

Imagine what might happen if every Catholic in the world would pray a Rosary on the same day! We have an example in October of 1573, when Europe was saved from the invasion of the mighty Turkish fleet, by the praying of the Rosary by all Christians!

So, on Good Friday, let us all pray a Rosary for peace in the world and the return of moral values into our communities. If possible, please pray your Rosary between Noon and 3:00pm.

There is to be a gathering at Southwark Cathedral on Monday of all of the Anglican Bishops and all of the Catholic Bishops.  You might be like me and wonder why 24 Catholic Bishops think that spending time en masse with their Anglican confrères matters, but hey ho.


Bishop Cunningham  is otherwise engaged, as apparently are Bishops Burns, Malone, and Williams, on diocesan duties.  Poor old Bishop Doyle is having a hip replacement, and Bishop Evans, for whom we should all be praying, is preparing to meet his Maker.


But Archbishop Nichols won't be there either: he's had a better offer.  He is to appear on Radio 4's Start the Week!


What has the Catholic Hierarchy come to!
Posted by Ttony at 19:41 4 comments: