After The Mute Centuries - For The Catholic Martyrs Of Wales

.
Poetry is notoriously difficult to translate, and Welsh poetry even more so, as part of the music it creates depends on the sound structure, utterly impossible to reproduce in another language.

So the translator has to work hard to express in the target language as much as possible of what is in the original, knowing that what he produces will never be more than a two dimensional representation of the original.

But we look at two dimensional pictures, seeing in them the three dimensions the artist's craft conjures up for us: so too we should persevere with poetry in translation (though for poetry, if for little else, I will resume in retirement the Welsh language classes I had to stop when children stopped so much else).

The name of Waldo Williams is, I imagine, unknown to just about everybody who ever stops by this place, yet he was one of the great poets of the twentieth century, just in a language few value.  He was a pacifist non-conformist, and became a Quaker, but his imprisonment for his pacifism gave him an understanding of what had motivated the Welsh martyrs, and he wrote the poem, the translation of which is below, about them.


After the Mute Centuries
for the Catholic martyrs of Wales

The centuries of silence gone, now let me weave a celebration
Because the heart of faith is one, the moment glows in which
Souls recognise each other, one with the great tree's kernel at
root of things.

They are at one with the light, where peace masses and gathers
In the infinities above my head; and, where the sky moves into night,
Then each one is a spyhole for my darkened eyes, lifting the veil.

John Roberts, Trawsfynydd, a pauper's priest,
Breaking bread for the journey when the plague weighed on them,
Knowing the power of darkness on its way to break, crumble, his
flesh.

John Owen, carpenter: so many hiding places
Made by his tireless hands for old communion's sake,
So that the joists are not undone, the beam pulled from the roof.

Richard Gwyn: smiling at what he saw in their faces, said,
'I’ve only sixpence for your fine' — pleading his Master's case,
His charges (for his life) were cheap as that.

Oh, they ran swift and light. How can we weigh them, measure them,
The muster of their troops, looking down into damnation?
Nothing, I know, can scatter those bound by the paying of one price.

The final, silent tariff. World given in exchange for world,
The far frontiers of agony to buy the Spirit's leadership,
The flower paid over for the root, the dying grain to be his cradle.

Their guts wrenched out after the trip to torment on the hurdle,
And before the last gasp when the ladder stood in front of them
For the soul to mount, up to the wide tomorrow of their dear
Lord's Golgotha.

You’d have a tale to tell of them, a great, a memorable tale,

Down A Theological Rabbit Hole

.
I should have written earlier to praise Greg Daly's The Church and the Rising, an anthology of articles published by The Irish Catholic. 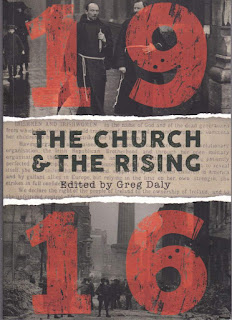 It tells the story of the Church and the 1916 Easter Rising in Dublin both looking at how the Rising was viewed at the time and reflecting on it a hundred years later.

Like any anthology, some bits are better than others, but anybody who isn't Irish will get something from this collection, even if it just a nuanced view of how the Church reacted to what would be the opening shots in what would soon be a war of independence.

At the end of the book are four reflections on the morality or justness of the Rising itself: two think it just, two unjust, and one of uses the theology of Just War to condemn it; (one of those thinking that the Rising was just rejects the application of Just War theology, and claims that there would need to be a theology of Just Rebellion if a specific theology needed to be applied: hmmm).

I'm not really that interested in the argument itself so much as in its retrospective application by the author of the article.  I'm not aware that any of the priests (all of whom will have had a pretty rigid scholastic formation) who ministered in Dublin in Easter Week to the rebels ever questioned the justness of what was happening, in the same way as the Chaplains to the Forces didn't question the justness of the fighting on the Western Front.  The author is reading history backwards, fitting a twenty-first century understanding of the doctrine of Just War as it has developed during the twentieth century to the Ireland of 1916: it won't do, just as the mawkishness which will in a couple of weeks accompany the 1 July commemorations of the centenary of the start of the Battle of the Somme won't do.  You can't judge people's actions using a hindsight not available to them.

Attitudes towards warfare in western society changed dramatically in the latter part of the twentieth century.  War, big-scale war, ended in the Holocaust and in Hiroshima and Nagasaki,and was replaced by more or less intense smaller scale conflicts.  Otherwise normal people began to think that the invention of the United Nations had meant that war would be no more: at least, that any war not sanctioned by the United Nations would be illegal

And along the way Just War doctrine has been hijacked, so that it now is supposed to match the non-doctrinal, non-theological, modern understanding of where the end of the Second World War left the West.

We're Catholics: we don't believe that doctrine changes to suit the prevaling currents of secular opinion, whether it be Just War or the admittance of remarried divorced Catholic to Holy Communion.  We have to understand how immutable doctrine applies to changed circumstances: for example, in what circumstances is it justifiable to target in a conflict a nerve-gas factory in the middle of a populated area (not the sort of thing St Thomas ever had to worry about); is the use of unmanned drones to kill an enemy leader an advance or a step backwards?  But the potential for war to be just doesn't depend on political sensibilities in late twentieth century Europe and North America.

The saddest bit of the book isn't about 1916: it's about today and comes when a current Capuchin friar talks about the ministry of the Capuchins of 1916 to the men who were to be executed.

'The salvation of souls was the absolute number one priority for the friars, he explains, adding that Dublin's secular clergy would have had the same concerns and the same determination to being pastoral care and the Sacraments to the injured and dying.

"Columbus Murphy's memoir shows that first and foremost they were really pastors of souls" he says.  "They really cared for the fellows' souls - they didn't want them to go to Hell.  That was the kind of theology of the day: it was Heaven or Hell, or a long, long term in Purgatory, so they were really interested in saving these guys' souls, making sure that they died in the favour of God with forgiveness and the oil of anointing on their bodies."

Describing how the priests ministered not just to the rebels but to their families, he says that during the Rising, "the priests met great faith in people, and shared the belief that they were there to save souls but that in doing that, built into it was pastoral care". Nowadays pastoral care tends to entail a "listening ear" and "a shoulder to cry on", he says, but "a hundred years ago it was a bit more stoic than that".'

UPDATE: I provoked some discussion from some really well-informed people about Just War theology and insurrection/rebellion.  You can read a summary of it here. Though it's not central to what I was on about above, one thing it's done for me is provide a more apposite example of when doctrine has to comprehend a new reality: in this case when both the governors and the governed accept that there has been a shift and that the governors can now only govern with the consent of the governed.  It doesn't mean that doctrine has to change: it means that unchanging doctrine has to be applied in a new circumstance.