How Really To Do Hypocrisy 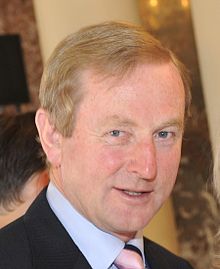 The Prime Minister of Ireland, Enda Kenny, has decided that everything wrong in Ireland is the Church's fault.

He has gone for the jugular of an animal that won't fight back.

Well, as someone who is neither Irish, a priest or a child abuser, I don't have to keep cringing, and I must say that it looks to me as though the Irish political class is trying to lay all of the ills of Ireland on the one institution that it can get away with portraying as worse than itself.

And if you enumerated all of the corruption and hypocrisy in Irish public life, would the Church or its religious be responsible for all of it?

"Filth" was the word the Pope used to describe those who abused children, and I agree with him, and would probably be much more intemperate in language and in action were one ever to come into range.

But the idea that an Irish politician - especially one who has climbed to the top of his country's greasy pole - can blame the Church for the corruption of his country would be a joke, were it not such a nauseatingly cynical example of naked self-interest identifying a scapegoat.
.
Posted by Ttony at 15:33 5 comments:

.
First the new rubrics, then the attack on traditionalism.

I get the impression sometimes that pairs of blokes with sunglasses, tight, high-lapelled suits, and spiky gelled hair wander round Eccleston Square waiting for the opportunity to turn up at somebody's door and say: "The Archbishop doesn't like it".

It's not just enforcement of the rules - it's the in-your-face creation of rules that are "Vin rules" rather than "rules" in any other meaning of the word.

Just as the new translation of the Mass invites Catholics all over the English-speaking world to think again about what is happening when the priest takes hold of bread and wine on the altar; just at the time that the rules about music at Mass are (re)stated for the first time in 40 years; just at the time when the Pope reintroduces communion kneeling as the ideal; Archbishop Nicholls, ++Vin to his online friends, decides: "not here".

Whatever the Church Universal might think about the honour due by those receiving Him to Our Lord, in England and Wales the rubrics have been rewritten to say "queueing and standing is normal".

Now this is a rubric created by some people in the Bishops' Conference in England and Wales.  The Bishops are too timid to rule their local Churches any more.  Although each of them has the right to resist this sort of nonsense, none of them ever does.  They have bought into an idea that the Episcopal Conference "pools sovereignty" and makes them more collegiately stronger - instead of realising that by surrendering their own authority they will have to answer not just for how their diocese was run, but for how the decisions they agreed to affected other dioceses as well.

So when ++Vin tells us that all the Bishops have agreed that the holy queue is normative, not just he but all the Bishops of England and Wales have to share responsibility for the conseuqnces of that decision, not least their agreement to tell the Holy Father that he has got it wrong.

Tell me I'm wrong, but isn't this a rather big deal?  ++Vin and the E&W Bishops have declared that the holy queue and communion standing is "right", and that an insight unknown to the first 1950 years of Catholicsm is mandatory because they say so.  Even worse, there is no appeal to some spurious 2nd Century text to pretend that this is a practice of the "Early Church".  We have to do it because ++Vin and the Bishops say it's right.

And before, and probably since, the Pope has said it's wrong.

I struggle to say the right words, but it seems to me that this is a (literally) cataclysmic attempt to wash something the Chrch has taught as orthoprax away.  If ++Vin is really so ready to say that what the Church has always taught is wrong, in spite of what the Pope is teaching now, in respect of the way we receive Holy Communion, what else might we look forward to?
Posted by Ttony at 20:39 6 comments:

Ever since I read Fr Longenecker﻿'s views on J F Powers' Morte d'Urban, I had resolved to read a bit of this, to me unknown, novelist who seemed to inhabit a space most of us would love to explore: a Catholic author writing novels set in a Catholic world.  Graham Greene without the sex, hypocrisy, heresy, tendentious posturing, and adolescent showoff mannerisms which made him a houseld word in EngLit but a sorry advertisement for the Faith.  (You imagine elderly female Tabletistas still enjoying a frisson when they reach down the well-thumbed paperback of The Heart of the Matter from the shelf in the study and remember how dear Fr H*****t had explained how the artist was so very close to God, so close that what we saw as bad or harmful was just our reflection in the beauty of the artist's creation ... but I digress.)
I read Morte d'Urban and came to a similar conclusion to Fr L, namely that the author had picked on the story of a soul: how a priest had stopped trying to be what he wanted God to want him to be, and had chosen to be what God wanted him to be instead, even if it did disappoint some people.  There was a particularly deft touch in making me at least feel for the period I was reading that I had some feel for what living in places like Illinois in the 1950s really was like - the Catholicsm that was at the heart of the story wasn't particularly the overt theme of the narrative, and that meant that I had time to think about point in time when America was outsrtipping the rest of the world without having the technological ability to be conscious of where the rest of the world was; a point where the car (more likely the automobile) was finally winning and driving the train and the coach towards oblivion; while all the time ubiquitous air conditioning was not even a figment of the imagination and the climate was to be endured, not vanquished.
I ordered a couple more books: this time of Powers' short stories, and when faced a week and a bit ago with suddenly having to decamp for work, chose them to take as being new and different.  And they really were.
I had to read most of the stories twice: once to understand the world in which they were set, and only the second time to try to understand the story.
We think we understand America (the USA, that is) but in fact what we understand is what the social media tell us America is.  For the period in which Powers is writing, America, for any European, is the gritty East Coast or the laid back West Coast.  there was also the West - the Wild West - but an urban world which doesn't reference even the east and west coasts, never mind a wider world, is something very new, to me at least.
I have no point of reference when dealing with this world: urban life in a mid-West town in the 1950s, where the Catholicsm has come neither from ireland nor from the Latin world, but from Germany is foreign.  But so is the America of some people using public transport because not everyone has cars; or travelling by train rather than plane; or the non-existence of air conditioning.
Powers describes this world so well that I found myself lost at times just in trying to imagine living in the world, instead of following him where he was leading.  But as an author he is very forgiving: going back to stories a second time, there was always a detail to trip me up which I had missed the first time round.  Like Jane Austen, or P G Wodehouse, he creates a world so perfectly that it becomes a real backdrop and the stories painted on it acquire some of their truth purely because he has written them there.
You are beginning to get the idea that I think I'm on to something - well, you're right.  I don't want to compare J F Powers with anybody else - "the Kingsley Amis of Illinois" on the fromt cover would be enough blurb to stop me from even reading the back cover - but just suggest that here is a writer whose skill with words, matched to an understanding of an environment to describe using them, might have ended up in something very special indeed.
Posted by Ttony at 20:24 3 comments:

I feel not unlike an SSN at the moment - "Run Silent, Run Deep".

I'm back again for a few days before probably having to disappear off for another fortnight or so: meanwhile little or no access to the Interblog.

But here's a thought to be going on with: are any of the Bishops in England and Wales engaging in any way with any of the issues which predominate in the E&W Catholic blogosphere?  And why not?

I began to wonder whether it might be interesting to look at the way News International was forced to mend its ways (and how!) and see whether they might not be lessons for us to identify and learn.
Posted by Ttony at 17:44 3 comments: