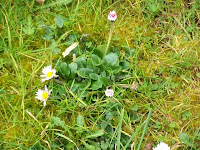 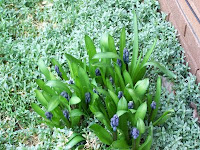 The front garden, a couple of minutes ago. (I am a bad gardener who encourages daisies.) I can't believe after the winter we had, and it was cold before Christmas, remember, as well as afterwards) that the daffs are out for St David's Day. 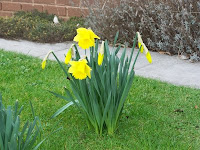 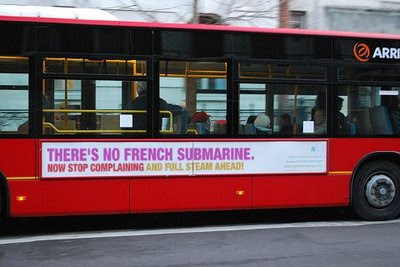 How To Be A Traditional Catholic

.
Over at the Universe, Moretben defined the "traditional Catholic". Not the Traditionalist, or the Trad, or the neo-Trad, or the member of the People's Liberation Front of Judaea. But somebody who anybody over 50 will recognise, or at least dimly remember.

This could be an epitaph for my father or my mother, for many of my uncles and aunts, and for the parents of most of my friends. It won't be for my generation, or for my children's generation, but I begin to hope that the Benedictine revolution might make it an unselfconscious reality in my grandchildren's.

A traditional Catholic would typically:

- be faithful to prayer.
- fast quite a bit.
- remember the poor.
- be un-selfconsciously immersed in the invisible world
- be deeply formed by the ancient liturgy - its feasts, fasts, seasons, familiar rites and ceremonies, though to a lesser extent, perhaps, its texts.
- go to Holy Communion quite infrequently by modern standards, and never without confession, preparatory fasting and prayer.
- maintain a rather arid understanding of sacramental and liturgical theology.
- have a serious attitude to theology, while remaining content nevertheless with the Penny Catechism.
- have a great devotion to the saints - especially the very ancient (even semi-legendary) ones.
- be spontaneously "orthodox"
- have a profound reverence for Rome and the Pope, taking for granted the teaching of his Church, but having little interest in Vatican politics or personalities.
- think the expression "loyal to the Magisterium" a very odd, if not actually alien and ideologial way of describing or thinking about his faith.
- far rather tell his beads than read an encyclical.
- understand instinctively that everything tending to disrupt the peace of the Church - violent controversies, revolutionary discontinuities, incongruous innovations - is from the Devil.
- know that in the presence of his fathers, it would be him that looked the bloody eejit.
- Have an acute sense of original sin and a corresponding scepticism, if not outright pessimism, about all human affairs.
- be profoundly distrustful therefore - if not contemptuous - of ideologies of every stripe, knowing that in every age and under every kind of regime, the saints have been few, and usually persecuted; be politically pragmatic, placing little trust in princes, but dutifully praying for them nevertheless and trying hard to be a good neighbour.
- be unafraid of natural or historical science.
- be devoted to the episcopate and the clergy generally, while maintianing a realistic view of human frailty, and the just limits of clerical competence.

- be faithful to prayer.
- fast quite a bit.
- remember the poor.

The Tablet Article: And Finally ...

.
I am still haunted by three sentences.

'Several said their adult children vowed never to go to the church again, such was their unhappiness with the liturgy. “People who have been away from church come back at Christmas and Easter and are totally put off. It is so sad,” said Mrs X.'

The understanding of what the Church is for portrayed here is plainly defective: the adult children mentioned have clearly vowed never to go to Our Lady of the Rosary, Blackfen, again (or at least consule Fr Tim), but as they are Christmas and Easter attenders only (rather than practising Catholics), then their views don't really count: they're not parishioners in any real sense, though their parents are and their sadness should be treated with sensitivity.

What I don't understand is how a Catholic writer in a Catholic magazine would put this proposition up as an example of Fr Tim's iniquity. (I'm assuming that the writer isn't making a cheap shot at Mrs X.) This isn't Catholicsm: it's Vicar of Dibley religious infantilism.
Posted by Ttony at 19:06 No comments:

And There's More! The Tablet's Other Half


Rev Dr Michael Hayes was appointed to take over editorship of (...) The Pastoral Review in the autumn of 2004. Michael brings with him a wealth of experience and knowledge, from parish through to university chaplaincy ministry as well as teaching theology and spirituality. He is also a psychotherapist.

Educated at Maynooth, Ireland and at Heythrop, Britain by the Jesuits, Michael is an experienced author having edited eight books to date. He is currently a Vice Principal of St Mary's University College, Twickenham.

To support Michael Hayes in his role, Dr Anthony Towey was appointed as Assiociate Editor of The Pastoral Review in 2005. An ordained priest and former economist graduating from the LSE, Dr Towey is currently Head of the School of Theology, Philosophy, and History at St Mary’s University College in Twickenham. With his wide-ranging experience, qualifications and network Anthony has proven an invaluable aid in his support role as well as providing well-written articles and research for the journal to date.

And in April 2006, and Editorial Administrator, Stephanie Bennett was recruited to look after the day-to-day editorial needs of the journal, which is fast becoming the most popular resource tool amongst those involved in active Pastoral Ministry in the Catholic Church.

Further changes in 2006 also include new Book Review Editor, Peter Tyler. Currently Director of Sarum College’s Christian Spirituality Programme, Peter studied philosophy, theology and psychology at Oxford, London and Middlesex Universities and is a qualified psychotherapist. He has lived and worked with three major religious communities - the Jesuits, based in Birmingham; the Benedictine Monastery of Christ the King, Cockfosters, North London and the L’Arche community, Liverpool. He has long worked with marginalised people such as the St Botolph’s Project for street homeless people in the East End of London.

It worries me a bit that only one of the three chaps is actually declared to be an ordained priest, though he prefwers the title "Dr" to "Fr". It's hard to tell whether the other two are priests or not: they seem to have had priestly formation but there is no clue as to their status.

The website allows you to read some of the aricles they were publishing up to 1999 in the magazine's previous incarnation: and you can read the Contents for each issue here.

Does anybody who reads it believe it to be faithful to the Tablet Trust's stated aims?

Complaining To The Tablet's Owners

.
I pointed out last November here that the Tablet is owned by a charitable trust, the aims of which are:

And two of the people who work for the Tablet, earn very large salaries (one over £80K, one over £90K), presumably because of their responsibility for delivering the aims of the Tablet Trust.

If you think that Ms Curti's article about Fr Tim does not meet the aims of the charitable trust, it might be worth writing to its Chairman, Sir Michael Quinlan, at its registered address:

The Bishop of Regensburg, Bishop Müller, is, together with the Archbishop of Munich, at the heart of Benedict XVI's attempt to reorient a church that, since Cardinal Lehman's leadership, has been drifting.

One consequence of this recent past, which is still too influential in the German Church, has been the criticism of the Pope by a large number of theologians for the recent lifting of the excommunication of the SSPX Bishops. Three of them are priests of the Regensburg diocese and Bishop Müller has given them an ultimatum: either retract or face the consequences. Among the potential consequences may be their prohibition from teaching in Catholic institutions.

It is about time we saw a Bishop who thinks a crozier is not purely ornamental. Let's see if others imitate him. Either you are a Catholic and you behave like one, or you aren't: end of story. And here's hoping for a reinstatement of the principle that Rome does not pay traitors.

On the other hand, events in the Austrian Church, over which the enigmatic Cardinal Schönborn presides, have been awful. The Pope has had to give up on an episcopal appointment. The person he had named as Auxiliary Bishop of Linz has had to offer his resignation before his rejection became inevitable because of the objections raised by progressives at his appointment. I think this news is appalling and a defeat for the Pope: a defeat in which Catholic Bishops were at the head of the enemy armies.
Posted by Ttony at 19:19 1 comment:

The Past Is A Foreign Country

.
They do things differently there. I have started to play with the archives of photos from Life magazine, now available from Google. This is Mass in Westminster Cathedral in 1939. 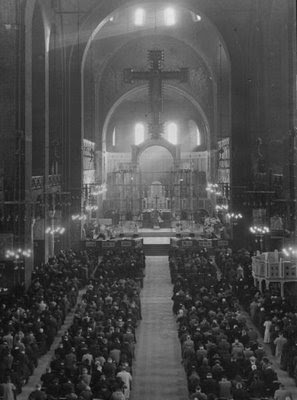 More Important Than News From Rome

What looks, on the face of it, like a grave injustice is about to happen. An asylum seeker who hasn't made any fuss, hasn't threatened any of us, and who has been housed by one of us, is about to be deported.

"One of Us", in this context, is Fiorella. And "one of us" means desperately hoping that a fraction of the merit that comes from her goodness might flow out to the rest of those of us in the Catholic Blogosphere in the UK who like to talk: Fiorella talks, but she does, as well; Works, as well as Faith.

But please pray for Fiorella too.
Posted by Ttony at 19:24 1 comment:

Another Way Of Praying For The Pope

A Spanish blog, SODALITIVM INTERNATIONALE PASTOR ANGELICVS, run by a group dedicated to making better known the life and works of Pope Pius XII has proposed a structured means by which we can offer prayers in reparation for the attacks on the Pope and on the Church.

a. that Priests should offer a Votive Mass of the Sacred Heart ad mentem Romani Pontificis and with the Commemorations pro Papa; and that during Eucharistic Adoration they should add (if they don't already) the prayers pro Romano Pontifice.

b. Lay people should offer Holy Communion for the health, intentions and safety of the Holy Father; should attend Eucharistic Adoration and join the prayers for the Pope; and offer a full Rosary for the Holy Father.

c. If possible, we should all recite in public (or at least in private) the Penitential Psalms and the Litany of the Saints in reparation for the attacks on Pope Benedict and our Holy Mother the Church.
Posted by Ttony at 15:52 3 comments: