An Example Of What I'm Getting At

.
Have a look at three versions of how the next twelve days were, could extraordinarily and are ordinarily being celebrated.  I haven't included the particular arrangements for the Diocese of Hexham and Newcastle in 1866 caused by its celebration of the Dedication of the Pro-Cathedral.) Vespers on Sunday are included because they were a natural part of parish life in the nineteenth century. This is the Calendar as seen by a layperson in England and Wales.

The Indulgence is one of eight periods of the year in which Catholics were urged to communicate and to earn a plenary indulgence when doing so.  The conditions varied, but for this indulgence (and three others) they were: 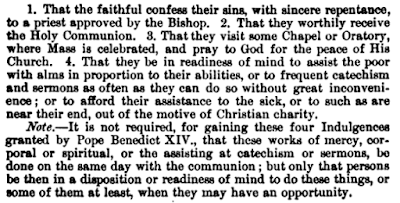 You will note that the fourth condition requires a sort of community service: you can't be a Catholic and not be part of a community you have to serve.

The main difference between the first two calendars is the sabbatarianism that precludes almost every Sunday from being a saint's day. That destroys a different relationship: that between the BVM, whose Assumption is celebrated as a Holyday of Obligation, and the next Sunday (ie the next time lay Catholics would attend Mass) on which Her father's feast was celebrated. And as Her father's feast was celebrated during the Octave of the feast of the Assumption, the preface at Mass is of the BVM, uniting St Joachim and the BVM to the action of the priest in re-presenting Christ's sacrifice on Calvary. That whole structure of relationships disappeared. St Hyacinth was shifted from the 16th to the 17th so that St Joachim could have his feast on the day after the Assumption - but few laypeople would get to Church on a weekday.

The abolition of the Octave of the Assumption made a temporary home for the feast of the Immaculate Heart of Mary, which had been celebrated on the third Sunday after Pentecost (unsurprisingly the Sunday in the Octave of the Sacred Heart of Jesus) but which had effectively disappeared from the Calendar. The Queenship of Mary is a modern feast, instituted by Pius XII. Whichever form you choose, however, you are celebrating the abolition of the Octave of the BVM.  Octaves are special weeks: some feasts are sufficiently important to have Vigils on which we fast so that we can better celebrate the feast itself, and the feast shapes the character of its Octave.  At the start of this week our 1866 ancestors are in the Octave of St Laurence; our modern EF brethren get the Vigil (do they still fast?), but not the Octave.  In the OF the feast on a Friday is probably an excuse to avoid abstinence.

I could labour this, but I won't The fact remains that a structure of lex orandi lex vivendi lex credendi was broken and recast, and the new version didn't - couldn't - work as well as what came before it.
Posted by Ttony at 15:58 No comments:

.
There are two triggers for this post: the first was a disagreement on Twitter about whether a parishioner used to the pre-1910 Mass would even notice that Mass said according to the 1962 Missal was different. The other was a discussion with Rita in the combox of her blog about weaknesses which accompany the practice of the EF in England and Wales.  I wondered whether the experience of some of the new EF-only parishes might be providing green shoots which isolated EF Masses in resolutely OF parishes can't provide.  She answered:

"To me it is the whole sacramental life that is so terribly important, more so than simply the Mass, I have no attachment to the 1962; it is confession, veneration of relics, fasting, feasting, pilgrimages, blessing of food and other material objects, beating the bounds, family prayers/grace before meals, Vespers and psalmody in general, guilds, preaching outside of the Mass, parish retreats and conferences, 40 hours, churching, death as part of family life and not a clinical thing, prayers for the dead, remembrances of the dead, patron saints' days, angelus, litanies....

The Church Suffering and the Church Triumphant are overlooked too much..."

I wrote three years ago about the regular schedule of the parish of St John the Evangelist in Islington in 1863:

"The Missionary Rector of the Parish of St John the Evangelist on Duncan-terrace in Islington is the Very Rev Canon Oakeley, and he is assisted by the Revv William Ignatius Dolan, Andrew Mooney and Jean Baptiste Laborie Rey.  Masses on Sundays are at 7.00, 8.00, 9.00 and 10.00, with High Mass at 11.00.  Catechism and Benediction is at 3.00 pm, and Vespers and Benediction are at 7.00.  Weekday Masses are at 7.00 and 9.30.  On Holydays, Masses are at 5.00, 7.00, 9.00 and 10.00, with High Mass at 11.00, and Vespers and Benediction at 7.30.  On Days of Devotion, there is High Mass at 7.00, and Low Masses at 9.00 and 10.00. Vespers and Benediction are at 7.30. Every Thursday, and on all feasts of Our Lord, the BVM and St Francis of Assisi, there is Benediction with Instruction at 8.00 pm.  Sermon and Devotions in French are on Fridays at 8.00 pm. Every other evening there is Rosary or other Devotions at 8.00. Instruction and Devotions for the Confraternity of the Holy and Immaculate Heart are on Wednesday at 8.00 pm, with Benediction on the first Wednesday of the month. Compline is said at 7.30 on Thursdays in Lent except for Holy Thursday or during the Forty Hours Devotion.  Devotions every evening in May for the month of Mary, and every evening in November for the souls in Purgatory.

There are in this Church chapels of the Blessed Sacrament, our Our Blessed Lady, and of St Francis of Assisi, to the last of which the great Indulgence of Portiuncula is attached, and may be gained at each visit made between 6.00 pm on 1 August and sunset on the next evening.  Confraternities of the Most Holy Sacrament od of the Holy and Immaculate Heart of Mary; also of the Scapular of Mount Carmel and of the Seven Dolours.  By Rescripts of His present Holiness, a Plenary Indulgence can be gained once a year by visiting the Church any day on the usual conditions; also on the feast of St Francis of Assisi, and of the Stigmata, and on the first Sunday of every month.

I think the parishioner from 1863 catapulted into any modern parish and attending a 1962 Mass on a Sunday would notice an almost immediate difference: that Masses after Pentecost would be celebrated by priests in green; would be struck after a few days by the number of times the Last Gospel was In Principio instead of a second Proper Gospel; and more slowly would come to realise that the prayer life of parishes has changed dramatically. The rhythm of the parish as it existed in 1863 and for which Rita yearns (as do so many of us) has gone. The Divino Affatu reforms of Pius X inevitably opened the way to the subsequent reforms of the twentieth century just as the early Henrician reforms - the 10 Articles, say - were a precursor to Anglicanism. The difference is that where Henry VIII was being manipulated by protestant moles, Pius X believed, or was led to believe, that his reform would tidy up the calendar and relieve priests of some of the pressure the Office as it stood placed on them.

The Pian change was a gross piece of clericalism: it put the perceived interests of the clergy before other considerations, changing the calendar and the immemorial link between the Church's year and the year lived by parishioners in it, instead of relieving the onerous obligations of parish clergy by other means (for example, reducing the amount of the Office they were obliged to say). A sledgehammer cracked the nut, and destroyed not just the shell, but the seed inside as well.

I think the reason that Summorum Pontificum has not produced much traction since 2007 is that the 1962 Mass by itself is not an answer to any of the problems facing the Church, however much it might nourish the faith and practice of individuals within it.  The Mass needs to be thought of as part of the Office, and the Mass and the Office need to be thought of as parochial actions, and not just things done by the priest.

We can't go back to 1910 (though we could return to pre-1955 fairly straightforwardly).  But before we do anything, we should be looking at Preston and Birkenhead, at Reading and Warrington, to see if an exclusively EF environment will be able to re-evangelise Catholic England and Wales, if not the whole of England and Wales.
Posted by Ttony at 16:20 4 comments: