8-2: But Stuffing Still Knocked Out

.
I think that, on balance, I have a pretty good supply of saeva indignatio: as a rule, when something turns up to bother me, I react, and, in the cant of management consultants, I react assertively.  It is very rare that I am left winded, floundering, and ready to throw in the towel.

But in the same week that my Parish Priest has said that he will not have the new translation in his parish before he has to: i.e. not next week; I read the far more dispiriting news from Fr Brown that seminarians are being hounded to discover if any of them are secret biformalists: if you are attached to the EF, there is at best a question mark about you.

Imagine the resource that is being applied to achieve this: imagine the web of control which seeps out from Eccleston Square to ensure that the Eccleston Square vision of Church is not (in its view) sullied.  Worse still, imagine that this is not a panic reaction from a clique which is losing influence, but a refocusing of effort by a bureaucracy which decides for itself what "on message" means, and has decided that Benedict XVI is not on message for the Church in England and Wales, and that we are better off without priests who wish to conform to his vision of Catholic priesthood.

And I just feel that the game is up: they will win, they are winning: perhaps they have won, here and now.  They won't prevail, because we have been promised that they won't prevail, but the enemy is within and it feels that the battle is probably lost.  The difficult mind game of remaining faithful to Peter at the same time as remaining faithful to the Head of our local Church is being strained to breaking point.

Even if the gates of Hell are already gaping wide to receive the agents - and count the weight of every child lost to the Faith because of the actions of the agencies of the Catholic Bishops' Conference of England and Wales to guess what the balance might look like - we have to face the fact that, temporally, we may have lost already: if they stand four square against the Pope, how can they, or anybody who pays for them, describe themselves as Catholic.

There are about ten people who will read this and understands what 8-2 means in this context.  It means being able constantly to renew by being faithful to the past, and by understanding that we are all individuals and not just types.
Posted by Ttony at 20:40 5 comments:

Thought For The Day

What is it about this magnificent Pope that many bishops and priests feel unable to follow him? In a Church where there has been widespread division and too many episodes of quite dreadful behaviour, we should all be rallying under his example and leadership. He is a beacon of light, of truth, and of inherent goodness, that should inspire all our clergy to become like him. What a transformation this would bring to the Church and what great benefits would follow.


I'm sure I can't be the only one who has had the same thought, even if I haven't articulated it so well.  The good thing is that there are so many good priests who are inspired by him, and who are bringing great things to the Church, and we must continue to pray for them. 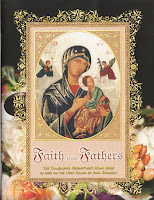 The latest edition of Catholic,  the quarterly published by the Transalpine Redemptorists has arrived.

As ever feeling slightly guilty, I look first to see what this edition's supplement is going to be, before addressing myself to what the editor probably thinks is rather more important material in the paper itself.

This time it is a copy of Faith of our Fathers, the Papa Stronsay hymn book.  Guess what: no Bind Us Together; no Gathering Mass; no Kumbayah; but a (slightly more eclectic than I would have guessed) anthology of Catholic hymns. 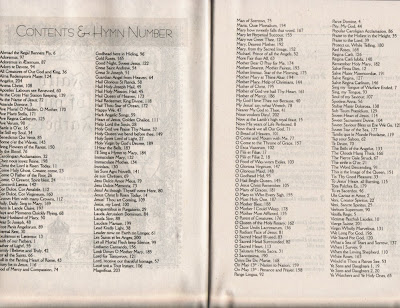 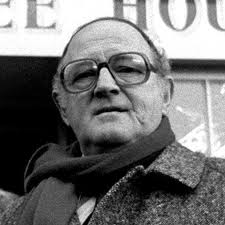 If you get a chance, look out for an anthology of his called Prescriptions of a Pox Doctor's Clerk: you'll read some very clever stuff, but also some articles in which the humanity, the fellow feeling, will bring you to tears.
.
Posted by Ttony at 20:46 No comments:

Did You Hear About The Thick Rioter ...

.
Did you hear about the thick rioter who was arrested by police for stealing 30 chicken tikka masalas?

It turned out he'd misunderstood his mates when they said they were going out to rob Currys.

.
Rioting and clearing up afterwards used to be so much simpler.  The protestors gathered and after airing their grievances began to cause trouble; rioters attached to the protestors fell upon the town and began to destroy things and people, and to loot.  Magistrates read the Riot Act and the militia advanced and began to open fire on rioters and arrest those whom they did not kill.  Riot being a crime attracting the death penalty, all those arrested were hanged after being found guilty, within the month.  They were executed as close as possible to where they had been arrested, special gallows being erected at the scene.

Barnaby Rudge has been excellent reading these last few days!

No: of course I'm not saying that we should bring back the death penalty for riot.  But it is interesting to speculate on the difference between what happens when there is a clear consequence for being convicted of riot, and the possibility of 40 hours community service when nobody seems to want to spell out in black and white exactly what the criminal has done. 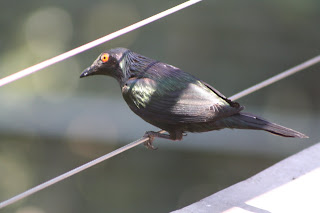 It is always odd to see something familiar and realise that there's something about it that's not right.  It's unsettling.  But because of the familiarity of the thing you thought you were going to see, the unfamiliar change is pushed away to one side, ignored or even forgotten.

I wonder if that's why the article Damian Thompson published about the Clifton Diocese's invitation to Tina Beattie to lecture inside the Cathedral about Vatican II seemed almost to pass me by when I read it.  In the universe I live in, no Catholic Cathedral would allow a (i) woman (ii) feminist (iii) to speak inside the Cathedral (iv) on a matter pertaining to the Faith.

The Diocese might sponsor a public lecture in a seat of learning or some central hall, though not if the subject were to be to reject core teachings of the Church, or if aspersions were to be cast on the person of the Pope; but the Cathedral would be retained purely for liturgical functions.

Increasingly the moral universe in which I live feels like one parallel to the one in which my spiritual fathers live.  This in Clifton; secular concerts in Westminster Cathedral; CAFOD parading anti-Catholics at its conference; the list goes on.

I wonder whether concentrating on matters liturgical has become a sort of displacement therapy, whether it has become a tree for us to focus on while the wood goes to rack and ruin.

The problem is that if the starling has red eyes, it's no longer sturnis vulgaris: it is something else.
Posted by Ttony at 10:20 4 comments:

.
I've been away again and came back to find that while I was away, the e-mail account associated with this blog was hacked: somebody managed to get access to the address book and was spamming addressees.  As far as I know, it hadn't yet got beyond little blue pills, but my apologies if you were on the receiving end.

That e-mail address has been closed down and has been replaced by another.  If you received anything and haven't received an apology from the new address, please let me know in the combox, but don't include your e-mail address as I should already have it.

Normal service will hopefully be resumed very shortly.
.
Posted by Ttony at 17:25 1 comment: