The Best Of Cardiff

.
A good, if cold, day out. My wife and daughter shopped; I didn't. 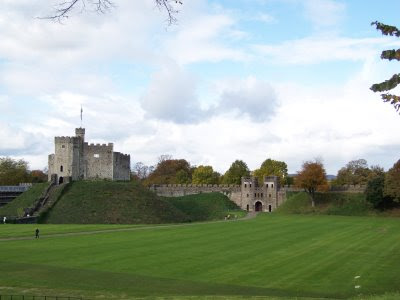 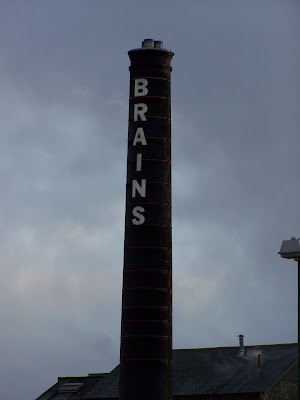 ,
What does "in communion" mean when the Bishop is prepared to tolerate anti-rubrical practice?

Suppose a Bishop (a real Bishop, such as the Bishop of Arundel and Brighton, for example) assents to a form of celebration of Mass on the feast of Christ the King which drives a coach and horses through the rubrics? Am I "in communion" with him?

Suppose another Bishop encourages (not in writing, or in any way that might form the basis of a complaint to Rome) his Parish Priests only to allow women to be extraordinary ministers, and encourages them not just to allow these women to purify the sacred vessels after Holy Communion, but specifically not to do so himself. Am I "in communion" with him?

What does one do if the Head of one's Church appears not to believe in what Catholics believe, and him obliged to uphold it?
Posted by Ttony at 20:09 5 comments:

.
The first from Phil asks us to sign a petition calling on the UN to respect the rights and dignity of the Human Person and the Family.

The second from the good Dr Ches asks British citizens to sign the petition at the No 10 website asking the PM to demand that the Iraqi government takes suitable steps to protect its Christian minority.

Each is important. Please think abousining.
Posted by Ttony at 12:26 2 comments:

.
Courtesy of Catholic Action UK, I hear that the BBC is about to go for Catholics as much as they went for Andrew Sachs. Ten thousand complaints seems to be the watershed that forces the Beeb to act. Let's prepare ...

... but let's also ask any Catholic lawyer or barrister who happens to be about the blogosphere how the religious hatred legislation might be brought to bear.
Posted by Ttony at 19:28 1 comment:

.
I pay my licence fee, so I employ them.

Does that mean I can sack them? 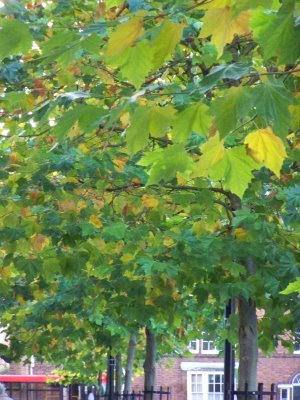 I thought that the end of October should have been the end of any pretence that Autumn wasn't in full flow. But I took this picture yesterday.
.
Posted by Ttony at 20:24 1 comment: 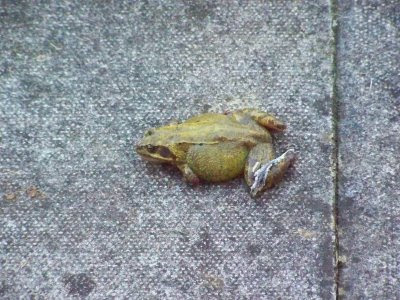 .
This was on the patio first thing this morning. It had been probably been dropped by an owl.

Either that or Aaron has been stretching his hand over the waters. (We are at least 300 yards from running water.) 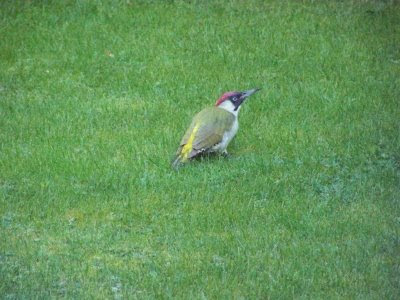 When I left home, after growing up on a Manchester council estate, I could recognise sparrows, blackbirds, and starlings: and that was it; there were no other birds (except for budgies). These days, a female green woodpecker can come into the back garden every morning to worry away at what must be the larvae of some leatherjackets (or some such) and I barely turn a hair. Last summer, we were sat in the garden under a tree and a sparrowhawk came and killed a sparrow right above our heads. Nature in the raw used to mean alsatians which were never kept on leads and were allowed to roam the estate day and night. This year I'm already watching out for the swans on their way to their winter homes. My 20 year old self would not recognise what I have changed into.
Posted by Ttony at 17:44 No comments:

The Rocky Horror Rite Of Church Closure In Leeds

If this sort of things makes you want to say one for the poor parishioners of the Diocese of Leeds, then the full version from Paulinus is available here.

Gathering song: Be Much Afraid [To the tune Be Not afraid]

You can say Mass without vestments
To impress the teenage kids
Just ignore the GIRM
We don’t give a fig
You can fill the nave with dancing girls
and we will understand
But say the Mass in Latin and you’re done.

Be much afraid.
We’re going to close your church down.
Say Latin Mass, and you’ll be on the dole.

Interfaith is all the rage
Meditation’s where it’s at
You can make a pagan incantation,
nothing wrong with that.
You can say your prayers with Rastas, Muslims
Jains, and Hindus too
But pray with other Catholics and you’re done

Doctrine is passe
You can make it up yourself
You can pick from Dawkins, Boff, de Mello
- anything off the shelf
You can quote Tissa Balasuriya,
Kung and Schillebeecx
But quote the Holy Father
and you’re stuffed
Posted by Ttony at 20:21 1 comment: 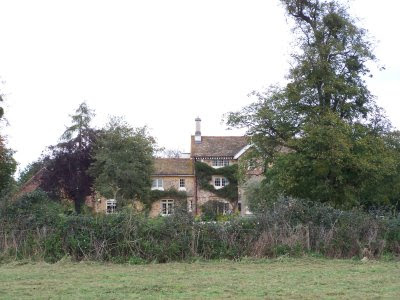 As if anybody would go round pruning trees into funny shapes! It's hard enough remembering where you have fences and hedges that need to be maintained!
Posted by Ttony at 20:22 No comments:

.
At least mistletoe should be cheap this year. Look what the autumn is revealing! 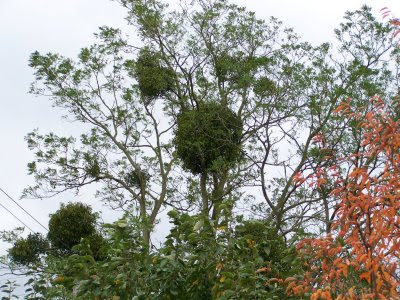 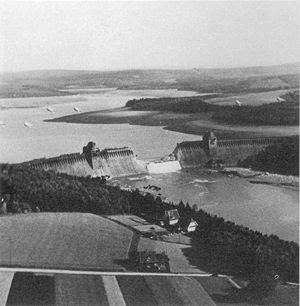 Don't remake the film; don't rename the dog.
Posted by Ttony at 20:11 No comments:

.
I read James Preece and wondered if he had produced a brilliant satire on Futurechurch. I then read Damian Thompson and found that it was for real. If you are really keen, you can find the download for the synthetic paraliturgy that has been invented for the Feast of Christ the King at either site: I won't link to it here.

How far is the Bishops' Conference of England and Wales prepared to go?

And what does "communion" mean? At what point can we, in good faith, take out our hankies and wave them farewell as they leave our shores forever?
Posted by Ttony at 20:23 No comments:

.
.
.
.
.
.
.
.
.
.
A quick foray to The Book Depository reveals just how much you can save if you spend there, so I have. I tried to persuade my wife that spending money in the UK on British books is the patriotic duty of any Englishman whose job seems secure and whose savings are safe in mutual societies which are not run by the sort of wanabee Gordon Gecko who has taken over so many of our building societies and has turned them into "banks".
..
But enough of that: one book about Church History, one about Military History, and another about a different flavour of Military History. Enough to keep me going until the weekend!
Posted by Ttony at 19:36 1 comment:

.
Orwell's Picnic put me on to a book: An Old English Parish by J Charles Wall, published in 1907, in which he describes with illustrations day to day life in a pre-reformation English parish.
.
It is to The Stripping Of the Altars what the History Of The English Speaking Peoples is to The Oxford History Of Britain: it introduces and skims over the subject for the general reader.
.
And it has illustrations: 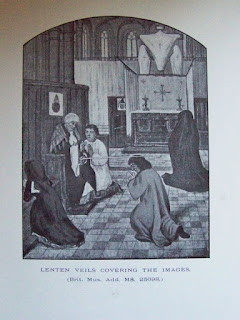 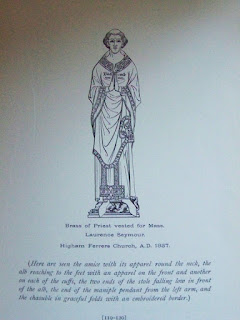 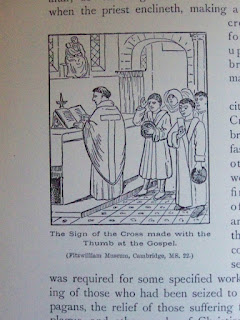 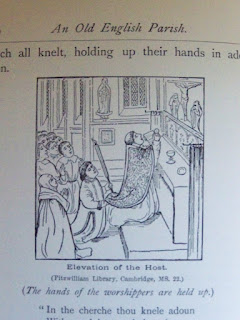 Good stuff for a Sunday afternoon, after you've cut the grass for the last time this year for the second time, and it's warm enough to sit and survey your handiwork with a glass of wine.

.
Here, (click on the red tab nearest the top) is the Bible being read in its entirety, and being broadcast by Italian TV online from Santa Croce in Gerusalemme in Rome.

The Pope started with the first part of Genesis; Cardinal Bertoni will end with the final chapter of Apocalypse.

It's maybe not much of an inspiration if you don't speak Italian, but just by clicking on it and registering its worth (because RAI will trumpet to the four corners any success this venture has), who knows which broadcaster may seek to emulate this in English!
Posted by Ttony at 20:15 No comments:

Priests: How To Really Annoy A Tabletista!

.
The idea arises from a comment by Fr Brown, here, but its development is entirely my own.

Imagine publicising a Mass using one of the Childrens' Eucharistic Prayers from the Roman Missal, and then doing it in its Latin original! The whole Mass done "soberly": biretta, maniple, ad orientem, chant.

Have a large group of properly prepared and catechised children, able to provide servers and to sing the ordinary prayers.

And then invite the Tablet.
Posted by Ttony at 10:58 2 comments:

.
According to the list of Cardinal Electors here, there are 45 Cardinals aged between 75 and 80, sixteen of whom are listed as "Emeritus", and can therefore be presumed to have retired. Of the remaining 29, nine have curial appointments.

That means that there are 20 major Sees whose Bishops will have presented their resignation to the Pope.

There are nine 74 year olds: four in Rome, five in Metropolitan Sees.

Two reflections: we shouldn't worry too much about the delay in naming the successor to Westminster: he's well down the queue. And we might think that Pope Benedict has the opportunity to shape the Church for the next 10 or 20 years if he gets this right.
Posted by Ttony at 20:45 No comments: