25 SUNDAY, third after Pentecost. The Most Sacred Heart of OUR LORD, double of the second class. Second prayers and last Gospel of the Sun­day. Preface of the Cross. White. Second Vespers of the Feast, with commemoration of Sts John and Paul, the Sunday, and the Octave. Plenary Indulgence. Collection for the Poor-School Committee, the benefactors of which can gain a Plenary Indulgence during the whole of the ensuing week.

29 Thursday Sts PETER and PAUL, Apostles, double of the First Class with an Octave, during which commemoration of the Octave, Creed, and Preface of the Apostles. Red. Second Vespers of the Feast.

1 Saturday The Octave of St John Baptist, double. White. [In dioceses of Clifton, St David's and Newport, and Plymouth, principal Mass of the BVM, with Gloria, one prayer and Creed; Litany of the BVM, and Benediction. White.]

In 1865 the Parish of Sts Mary and Joseph, Gate-street, Upper North-street, Poplar is served by the Revs John Stanton (Missionary Rector) and Henry Francis Bradbee. On Sundays Mass is at 7.30 and 9.00, and High Mass at 11.00. Catechism and Benediction 3.00. Vespers, sermon and Benediction at 6.00. On Holydays Mass is at 8.00 and 10.00. Prayers, sermon and Benediction at 7.00 pm. Weekday Mass at 9.00. Every Wednesday evening Litany of Loretto, instruction and Benediction at 7.00 pm. On Fridays in Advent and Lent Stations. Confraternities of the Blessed Sacrament, Living Rosary and St. Patrick. The Parish serves
Poplar Workhouse, Stepney Workhouse School, Limehouse Poplar Hospital, Poplar Fever Hospital, and Cholera House.

21 Wednesday St Aloysius Gonzaga, Confessor, double. Third prayers for the Pope (Anniversary of the Coronation of His Holiness). White. [In D of Birmingham, fourth prayers for the Bishop.]

24 Saturday (Feastday of Devotion) The NATIVITY of St JOHN THE BAPTIST, double of the First Class with an Octave, during which the feast is commemorated. White. [In D of Liverpool, Plenary Indulgence.] Abstinence.

The Cathedral Church of St George in St. George's-fields, Southwark is served by the Right Reverend Bishop Grant, the Very Reverend Thomas, Provost Doyle, DD, the Reverend James Canon and Vicar General Donell, and the Revs Joseph Moore and Robert Simpson (Chaplain of the Military Prison). On Sundays Mass and discourse at 6.30 and 7.30, Mass at 8.30 and 9.30, High Mass with sermon at 11.00.  Catechism and Benediction at 3.00. Vespers, sermon and Benediction at 6.30. On Holydays Mass at 7.00, 8.00, 9.00, 10.00, High Mass with sermon at 11.00. Vespers, sermon and Benediction at 8.00. On Weekdays Mass at 8.00, 9.00, and 10.00. On Mondays Vespers of the Dead and discourse at 8.00. On Wednesdays Litany and Rosary at 8.00 pm. On Thursdays Litany and Benediction at 8.00 pm. On Fridays in Lent Stations of the Cross at 8.00 pm. On Saturdays Litany and Procession at 8.00 followed, on first Saturday by Benediction. Confraternities of the Blessed Sacrament (Thursday), of the Sacred Heart of Jesus (Friday), of the Rosary, of the Immaculate Heart of the BVM for the conversion of sinners (Saturday), and of the Guild of the Blessed Virgin and St. George, or Confraternity for the Dead. Third Sunday of July, Feast of St. Victor, Martyr. The Church is open for the faithful, from 6.00 in summer, or 7.00 in winter, till 1.00pm.  Mass is offered in the Petre Chantry for the repose of the soul of the late Hon. Edward Petre, and in the Knill Chantry for the late John Knill, Esq R.I.P.). Workhouses: St. Saviour's, St. George the Martyr's, Lambeth, and Newington. Bethlehem and St. Thomas's Hospitals. Prisons: Military and Horsemonger-lane.

.
11 TRINITY SUNDAY, and first after Pentecost, double of the second class.  Commemoration and last Gospel of the Sunday, Preface of the Trinity (and on subsequent Sundays). White. Second Vespers of the Feast, commemoration of St John of St Facundo, of the Sunday, and of St Basilides and Companions, Martyrs. [In Diocese of Westminster, collection for Church Building Fund. In D of Hexham and Newcastle, Plenary Indulgence. In Diocese of Plymouth first Vespers of St Boniface, commemoration of Trinity Sunday.]

15 Thursday CORPUS CHRISTI, double of the First Class with an Octave, during which commemoration of the Octave, Creed, and Preface of Christmas. White. Second Vespers of the Feast. Plenary Indulgence. [In D of Nottingham commemoration of St Barnabas at Vespers.]

16 Friday Of the Octave, semidouble. Second prayers Concede, third prayers for the Church or Pope. White. Abstinence. [In Diocese of Nottingham St Barnabas, Titular of the Cathedral, double of the First Class with an Octave, during which commemoration of St Barnabas. Preface of the Apostles. Red.]

17 Saturday Of the Octave, semidouble. Second prayers for the Pope (Anniversary of the Election of His Holiness), 3d prayers Concede. White.

.
4 WHITSUNDAY or PENTECOST, double of the First Class with an Octave. Red. Vespers of the Feast. [In Diocese of Hexham and Newcastle Plenary Indulgence.]

5 (Feast of Devotion) WHITSUN-Monday, double of the First Class. Creed during the week. Red.

6 (Feast of Devotion) WHITSUN-Tuesday, double of the First Class.  Red.

7 Ember-Wednesday, of the Octave, semidouble. Second prayers for the Church or the Pope. Red. FAST.

10 Ember-Saturday, of the Octave, semidouble. Second prayers for the Church or the Pope. Red. FAST. 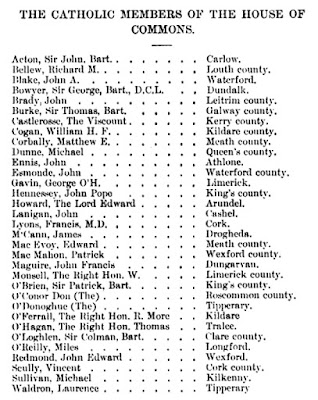