.
Once a week, I serve Mass for a priest who has learned the EF but who is not allowed to celebrate it publically. I have to serve for him sometimes when nobody else is present, because, as the Mass is not public or announced, the only people who come to it are those whom he or I invite, and there is an understanding that invitations are not a way of making these private Masses public or regular celebrations: anybody who comes thinks it's a secret one-off.

It is hard to express just how special it is to serve a priest when there is nobody else present, especially when he says Mass at a great High Altar which was built as an expression of the triumph of the Holy Sacrifice. The server's role is always subservient to the priest's, but the Priest always emphasises his unworthiness, and as a result, the craftsman and his apprentice, Don Quixote and Sancho, approach the altar as one person who happens to be able to do something he scarcely ought to, and his assistant who worries that he can only get things wrong.

And in amidst the mistakes, the mispronunciations, the difficulties with working out the optional memoria, God appears on the altar and humbles us. After he has had Communion the priest turns and holds up the tiny white focus of light that I am about to recieve and gives me the chance to say on my behalf and on behalf of the odd visitor who happens to be there that we aren't actually worthy just before God gives us Himself anyway.

The moment the server sees which nobody else does comes just before the Consecration: as the priest prepares to bring God to earth, in the final moment before he commences to say the prayer Jesus said, he runs his fingers and thumb along the cloth on which the host is resting to ensure that any speck of anything which might have touched his fingers since the Lavabo, a few minutes before, when they were cleaned, can be removed. How much does what is about to happen matter!
Posted by Ttony at 20:19 1 comment:

Sat in the back garden, watching huge cumulus slowly pass behind the hill like clippers in full sail, like in a film about the Battle of Britain, only in colour, my mind goes back to pasts I know, even though they take place before I was born.

Courtesy of Cathcon, I find my way to the site of Pathe News, and discover that the Whit Walks in Manchester from the 20s and 30s are now available for all to see here. This selection covers the years in which each of my parents made their First Holy Communion: are they here?

And in the wake of Archbishop Nichol's Enthronement, look here at those of Archbishops Griffin and Godfrey, and here at Archbishop Heenan's. Look especially at this last one and see somebody who really fits into the vestments and the role. Here is a man born to achieve this See, and to suffer for it.

.
From Zenit. I can't think of a single thing that's wrong with this story.

VATICAN CITY, JUNE 24, 2009 (Zenit.org).- The U.S. astronaut who carried relics of St. Thérèse of Lisieux into space and put them in orbit around the earth attended Benedict XVI's general audience today.

On a Discovery shuttle mission one year ago, Colonel Ronald Garan brought the relics given to him by a Carmelite community in New Caney, Texas. The astronaut had called the women religious before his space flight to ask for prayers, and at that time he told them he could take some small item into space on behalf of the community.

The sisters reported that the words of St. Thérèse came to mind: "I have the vocation of an apostle. I would like to travel over the whole earth to preach your name and to plant your glorious cross on infidel soil. But oh, my beloved, one mission would not be enough for me, I would want to preach the Gospel on all five continents simultaneously and even to the most remote isles. I would be a missionary, not for a few years but from the beginning of creation until the consummation of the ages."

Garan stated that he will be bringing a second relic of the saint to space on his next mission, which is scheduled for March 2011.

The colonel is also the founder of the Manna Energy Foundation that, by using NASA technology and U.N. funding, is implementing a unique system to make potable water in the villages of Rwanda.
Posted by Ttony at 20:09 1 comment:

.
Things my mother would never had said to my father that my wife says to me:

"Can you stop off at Waitrose on the way home and pick up some lamb." 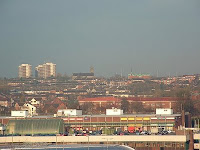 There was no Waitrose in North Manchester. There never will be.
Sainsbury's was posh enough. We did Tesco's.
My father did not "stop off" on his way back from work. He came home.
My mother shopped when she shopped. She didn't miss things.
Because you know what you're eating ever day.
My father did not get involved with "food shopping". He worked.
"Some lamb" would have been meaningless to him. A leg is "some lamb"; so is a chop.
And if they thought that en famille we'd be eating curry on a Wednesday evening they'd be worrying. And then they'd remember that "down South" is a foreign country and that they do things differently there.

.
Is it just me? Each week I look at the back page of the Catholic Herald, hoping that there won't be an article, and each week the enigmatic face is there, and I feel as though another little bit of oxygen has been stolen from the atmosphere.

Why is he in the Herald? Can the Tablet not afford his column?
Posted by Ttony at 18:14 3 comments:

.
Is it really just a coincidence that just as Peter is locked into trying to exert his authority over the Austrian Bishops, the SSPX announces that it is going to ordain 30 new priests?

Is there a sense in which wishing a plague on both their houses might be licit?
Posted by Ttony at 20:14 2 comments:

More About The Past

.
One of the problems of researching Modern History is coming across the relentlessness of anno domini.

A friend found a reference in a 1945 document to Squadron Leader Newton-John, and established that, yes, it was Olivia's father.

Learning About The Moral Compass From The Past 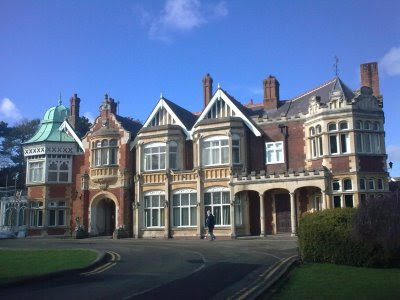 From the Telegraph, about Bletchley Park:

"Mr Greenish is the one who now paces the potholed paths and contemplates the task of rescuing what he believes is the single most important British site of the Second World War. He is up against Government indifference, but his vision is compelling: to use Bletchley's legacies of rigour and selfless service to lead a renaissance in the teaching of mathematics and the idea of public service.
At a time when incomprehensible financial instruments have brought down the banks, and MPs have lost their moral compass in a mire of expense abuses, does not the work of the devoted mathematicians who worked in secret for the national good not offer a refreshing model of service for modern Britain?
Mr Greenish certainly thinks so. "If we look at what was done at Bletchley, proper maths, proper analysis, everything recorded and accounted for, and if we look at the morality of those who worked here, who never spoke a word about what they did and when asked to keep the secret for the rest of their lives, have done, it is an example for the nation," he argues."
Posted by Ttony at 16:33 No comments:

.
Mac tagged me for a meme: "How Many Statues Do You Have?"

The rules are simple. Count the number of statues in your house (NB. priests are not allowed to count the statues in their church as well as the ones in their house... unfair advantage!!) Describe the statues, and/or put up some photos. Then tag three people. I'm keeping the tag number low so that everyone has a chance to tag someone... 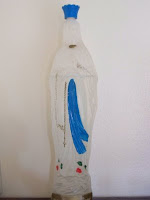 I went round the house counting and am ashamed to say that I reached a total of ... one! (And that one's really a holy water bottle from Lourdes.)
There's a crucifix in every room except the bathrooms.
Likewise, there's at least one holy picture.
There are icons (Russian and Greek).
There are devotional books, Missals, Breviaries.
But there are no statues, and I'm at a loss to work out what's happened to them. Where are St Anthony of Padua and St Martin de Porres? Where is the one of the BVM crushing the serpent's head? This is a deep mystery and one I shall set out to solve.
In the meantime, I tag: Phil and Kirk, even though they use Wordpress, and Brother James.
Posted by Ttony at 14:04 2 comments:

.
For well dressed Bishops. From Spain. 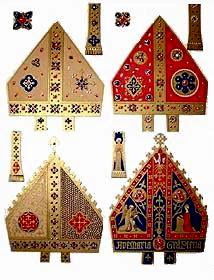 .
This comes from Fr Hunwicke's combox and might be the best possible way of stopping some of the terrible celebrations of Mass that many of us seem to have to endure regularly. Film the priest, then:

"They should be obliged to watch a recording of their mass to get something of what the people experience."

.
It suddenly became clear to me, as I was reflecting on a blogospheric contretemps in which I had become involved, that Archbishop Nichols has a tabula rasa in front of him.

When Cormac Murphy O'Connor was enthroned, he had little choice other than to try to maintain the position Cardinal Hume had established of "nice Christian Archbishop", at a time when the Anglican Church seemed keen on tearing itself apart. Apart from the annoyingly false accent, MO'C seemed to fit the bill to perfection, but the bill, and his relatively liberal Catholicsm, locked him into a place in the Establishment which I'm sure he didn't want, and in which he didn't fit.

Archbishop Nichols has a wonderful opportunity in front of him, because there are no such expectations weighing on him. As Nulabour expires painfully before us, so does soft political Christianity: it's not really a surprise that ++Cormac has turned down Blairs "'Faith' Foundation" because it showed itself up as the reductio ad absurdam it was always bound to be the moment Tone opened his mouth about it. But the silencing of the Cardinal is the Archbishop's opportunity: ++Vincent doesn't have to go anywhere ++Cormac went or might have been going.

And that's just the public square: what about his own constituency, the Church in England and Wales? It's his for the taking if he will lead. There are all sorts of single issue Catholics who want to impose their own monoculture on the way we live our Faith: (I was going to post a list but you can build your own: start with CAFODistas and with Lefebvrites); but ++Vincent doesn't need to bother with them. Nobody has any hold at all over him at the moment.

His interview about leaving Liverpool at the time when the Archdiocese seized on the Stalinist certainties of late 70s trade unionism, and opened itself for the Worlockian era rings another bell: he left. He knows how to make a break.

On behalf of the Catholic Association of Catholic Catholics for Catholic Catholicsm, I adopt the "sitting back carefully glass in hand and looking relaxed while watching closely for the signs which are likely to become apparent soon" position. The glass may need the odd refill, but I am confident we'll see our man in action soon.
.
Posted by Ttony at 20:15 1 comment: 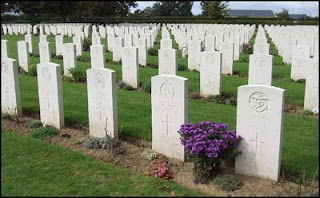 At the Commonwealth War Graves Commission Cemetery in Bayeux an inscription reads:

.
So close to Lancashire, it's almost unfair.