.
I haven't really said anything much about Amoris Laetitia (and will go back to Angeluses, Novenas and Ordines after this), and that's because sexual sin is the most individual and the hardest to judge and absolve.  Sex is the most basic and base of our instincts, and the one in which our brutishness has the best chance of being revealed.  It is also the occasion of sin against which the highest ideal has been set: that sexual union should only take place between lawfully married spouses completely open to the gift of conception. It's not like stealing or killing: this is something our bodies and minds are designed for.

Of course every grace is available to those who ask for it, and we all know of examples: of heroic and faithful fecundity; of pious resignation to unwelcome aridity; of chastity accepted as just one element of the greatest of vocations. And we all know, and mainly personally, how easy it is to fall short of the great ideal, and we know the particular hypocrisy that surrounds sexual sin: the couple who abstain so as not to conceive who look down on the contracepting couple who learned NFP at Church looking down at the contracepting couple who use chemicals and these looking down on the remarried couple who in turn look down on the unmarried couple, and all look down on the gays. (How is homosexual sexual sin worse than heterosexual sexual sin when at least homosexuals aren't putting a barrier between their sexual activity and procreation?)  And when was the last time anybody here was taught about continence.

And the priest walks into the confessional to face all of this and the whole contextual misery in which somebody acknowledges their sin and their need to repent and access grace and has to decide how to address the particular situation of a particular individual at a particular point in time.  Poor priests!  It was hard enough before Amoris Laetitia: how difficult must it be now.

And all this talk of "living like brother and sister"! I know two or three examples of brother and sister house-shares and I can assure you that they don't involve people who share a bed or sexual longings for each other.  For what it's worth, I think that the Church's (or at least some churchmen's) attempts to "develop doctrine" have been thrown into relief by sexual sin: you can't pretend that what's sinful isn't.  You might argue that contextually what one absolute monarch did in the sixteenth century looks objectively like mortal sin, while analogous activity by a nineteenth century slumdweller looks objectively like venial sin; but they're both sins, and, anyway, sins are committed by people, and it's what is going on in the mind of the person that the priest in confession or, I daresay, God, at the Judgement will look at as much as at the objectivity of the sinfulness of the action.

So I'm not getting into arguments about ambiguous footnotes, or demands that strict rules should be applied across various boards.  I know about my own sinfulness and will address that, I hope, before starting on anybody else's.

But I will say that in all of this I want a teacher who teaches me unambiguously what is right and what is wrong.  I want a Church and a Pope who tell me that I have fallen short and that in spite of that I can still stand up again and move forward.  I want that teaching office, the confirmation f the brethren to be at the heart of what the Pope and the Bishops are for.

And instead, we learn that the Pope isn't even going to offer teaching and correction to his brother Bishops during their ad limina visits henceforth. He's given up on the teaching office he was elected to. That, I suggest, is the crisis: he can't even be bothered to pretend.
Posted by Ttony at 20:48 1 comment:

Fourth Sunday After The Epiphany 1865

2 Thursday (FEASTDAY OF DEVOTION) THE PURIFICATION OF THE BVM, double of the second class, Creed, Preface of Christmas. White. Plenary Indulgence. Before Mass the Candles are blessed.

The Parish Church of St Mary, Dunchurch-road Rugby, is served by the Institute of Charity (the Rosminians). The Very Rev AM Rinolfi is the Provincial, and the Revv Joseph Akeroyd, William J A Sheehy and Peter Castellano are also based in the parish.  On Sundays and Holydays Mass is at 7.00 and 10.00. Catechism is at 3.00, and Vespers, Sermon and Bendiction is at 6.00.  Weekday Mass is at 7.00 in Summer and 7.30 in Winter. Rosary, lecture and Benediction every Thursday at 8.00.  Stations of the Cross on Fridays in Lent.

22 SUNDAY Third after Epiphany, semidouble, second prayers of the BVM, third prayers for the Church or the Pope. Green. First Vespers of the Espousals of the BVM, commemoration of the Sunday and of St Emerentiana, Virgin Martyr. White.

25 Wednesday The Conversion of St Paul, Apostle, greater double. Second prayers of St Peter, Creed, Preface of the Apostles.  White. [In Diocese of Liverpool, third prayers for the Bishop.]

This is the first of only five Sundays this year when the priest will wear Green.

The parish of Our Immaculate Mother and St Anselm Whitworth is served by the Rev John Millward. Sunday masses are at 8.30 and 10.30. Baptisms are at 2.00, instruction at 3.30 and Compline at 6.30.  On Holydays masses are at 5.00 and 8.00. There is an evening service at 7.30. On weekdays Mass is at 8.00. Churchings are after Mass on Mondays. On Thursdays, rosary, instruction and Benediction is at 7.30pm. Confessions on Sunday at 3.30, and for children on Friday evening.  The Holy Sacrifice is offered once a week in this Church for its benefactors.

15 SUNDAY Second after Epiphany. The MOST HOLY NAME OF JESUS, double of the second class.  Second prayers and last Gospel of the Sunday, third prayers of St Maur, Abbot. Preface of Christmas. White. Second Vespers of the Feast, commemoration of the Sunday and of St Marcellus. Plenary Indulgence.

16 Monday St Marcellus, Pope Martyr, semidouble.  Second prayers of the BVM, third prayers for the Church or the Pope. Red.

Looking for a school for your daughter? 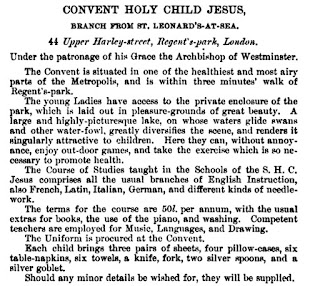 Sunday Within The Octave Of The Epiphany 1865

8 SUNDAY within the Octave, and 1st after Epiphany, semidouble, second prayer of the Octave. White. Vespers of the Sunday, commemoration of the Octave. [In Diocese of Hexham and Newcastle, Plenary Indulgence.]

9 Monday Of the Octave, semidouble, second prayers of the BVM, third prayers for the Church or the Pope. White.

10 Tuesday Of the Octave, semidouble, second prayers of the BVM, third prayers for the Church or the Pope. White.

12 Thursday Of the Octave, semidouble, second prayers of the BVM, third prayers for the Church or the Pope. White.

Fasting and Abstinence in 1865

Fasting Days, on which flesh-meat is forbidden, and only one meal allowed:

The Forty Days of Lent; the Ember Days; the Vigils of Whit-Sunday, SS. Peter and Paul, the Assumption, All Saints, and Christmas; and the Wednesdays and Fridays in Advent.

Abstinence Days, on which flesh-meat is forbidden:

The Sundays in Lent, unless leave be given to the contrary, and all Fridays, except the Friday on which Christmas-Day may fall.

The following are the usual Dispensations for Lent granted each year by the Bishops of England for their respective Dioceses, by the Authority of the Holy See.

3.            Cheese, under the same restrictions, is allowed on all days, except Ash-Wednesday and Good-Friday.

4.            The use of dripping and lard is permitted at dinner and collation on all days, except Good-Friday.

On those days, Sundays included, whereon flesh-meat is allowed, fish is not permitted at the same meal.

These are the rules in place until modern times.  The only major change was that from 1917, the obligation of abstinence was removed on days of precept which fell on Fridays. Minor changes included better regulation of the use of butter and the definition of suet as only allowable when meat was allowed.

Fasting meant only one meal: a modest meal according to one's station in life, and which should be completed in less than an hour.  Separate from this meal, two collations could also be taken, though together they should not be as large as the single meal.

The Lenten dispensations date from the time of the Vicars Apostolic and temper what, looked at from 2017, is a tough discipline, though I think if we still followed it I would feel able to look Muslim colleagues in the eye during Ramadan and say "yes, we fast too".

The Feast Of The Circumcision 1865

.
I copied an Ordo for England and Wales a couple of years ago which showed what parish life looked like before the changes introduced by Pope St Pius X which began a process of disastrous liturgical change in the Latin Rite Church.  I'll try to do the same this year, but will probably leave out the sententious obiter dicta.which added, I think, little of value.

1 SUNDAY (Vacant) CIRCUMCISION OF OUR LORD double of the second class. Creed (till the Octave of the Epiphany inclusively); Preface of Christmas (till the Epiphany). White. Second Vespers of the Feast, commemoration of the Octave of St Stephen only.

3 Tuesday. Octave of St John, Apostle and Evangelist, double. Commemoration of Octaves of St Thomas and Holy Innocents, Preface of the Apostles. White.

4 Wednesday. Octave of the Holy Innocents, double. Commemoration of the Octave of St Thomas. Red.

6 Friday EPIPHANY OF OUR LORD, double of the first class, with an Octave, during which the Preface of the Epiphany is said. White. Second Vespers of the Feast. Plenary Indulgence. Abstinence.

7 Saturday. Of the Octave, semidouble; second prayers of the BVM, third prayers for the Church or the Pope White. [In Dioceses of Clifton, St David's and Newport, and Plymouth, principal Mass of BVM with Gloria, one prayer and Creed; Litany of the BVM,and Benediction. White.]

The Parish of St Mary in Chippenham is served by the Rev Maurice Victor Domenge, a Missionary Priest of the Congregation of St Francis of Sales.  On Sundays and Holydays Mass and Instruction take place at 10.30. Catechism is at 5.30. Vespers, instruction and Benediction are at 6.30.  Confessions on saturday from 5.00 to 7.00 pm, and on Sundays and Holydays before Mass.
Posted by Ttony at 17:35 20 comments: