.
There is a piece on the BBC's website about Dr Buckle, a "mediaeval music expert and liturgical adviser" to those planning Richard III's reburial.  She has found something which will allow the powers that be to reconstruct the rites which should have been afforded to Richard III's remains on their transfer to a proper tomb.

I can't think of any worse option: a pastiche of a ceremony carried out by people who don't believe in its efficacy and who do not have the power to effect what the rite is intended for.

What a depressing start to the day.

But while I've got you: why would an Anglican Cathedral need a mediaeval music expert to be its liturgical advisor?  Does the CofE not think that it has any of its own?  (And, although I'm no expert, aren't we into the Renaissance in 1485 rather than the mediaeval period?)

.
What with all this talk about venerating St Peter's bones, I thought I might produce a slightly edited version of something I posted before about visiting St Peter's relics.  The edit reflects a change in me since I first wrote about this: my attitude to relics and pious traditions previously was orthodox, but not particularly concerned.  Even though I was perfectly content to accept that in line with the very earliest traditions of the Church, St Peter's had been built over St Peter's grave, and that the remains that had been found were his, this was a sort of highlighting, rather than a necessary part of my faith.  Now I'm not so sure.  St Peter's being buried underneath the high altar of St Peter's, the Rock on which Christ's Church is built has come to add a new dimension to my faith, helped, day's after I returned from the visit, by a priest wondering aloud during a sermon whether (or possibly asserting that) the word for "rock" used by Jesus in Aramaic was the same word used for the Rock on which the Temple was built in Jerusalem.

My faith has become less - linear, I suppose.  I still understand and appreciate dogma and definition: they are a critically important part of understanding what we believe and why.  But to that has been added a greater appreciation of mystery: I am more accepting of the fact that some things simply are, even if we can't rationalise or intellectualise the connections.  St Peter's bones aren't beneath the high altar simply because the Basilica was built over his tomb.  St Peter's bones are beneath the high altar because the Church was built from his tomb.  That makes his bones more, not less important, for as they inspired the evangelisation of the world in the first half of the first century, they can inspire its re-evangelisation. 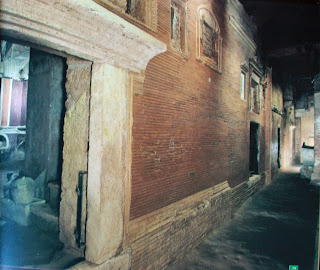 We spent the morning visiting St Peter's Basilica and then went for lunch. We returned, went to the Vatican Post Office to write and send some cards and then asked the Swiss Guards to let us though to visit the Necropolis. I showed our tickets, and they presented arms for us to go through. A large number of tourists thought we were important and took photos of us.

A seminarian from the American College greeted us. He told us the how the Constantine Basilica had been built, how a Roman cemetery had been covered with earth, in order to level a platform on the Vatican Hill and place the new Basilica above St Peter's tomb; how the exact site of the tomb of St Peter had been lost over the ages; how the Basilica we know today had been built, leaving the floor of Constantine's Basilica as the crypt of the modern Basilica.

Then we went down into the Necropolis. This was a normal Roman burial ground, on the surface once upon a time, but buried - and therefore unwittingly preserved - by Constantine when he wanted to build on the site because not even the Emperor could disturb the last resting place of the dead. 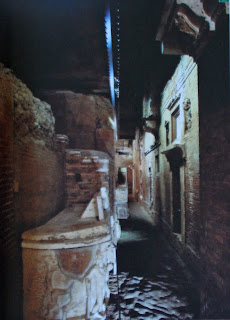 He told us the story of the discovery (or rather the rediscovery) of the Necropolis in 1940, and Pius XII's encouragement of the archaeologists who hoped to find St Peter's grave. He told us about (and later pointed out) the very early shrine to St Peter - the first Church and possibly the burial ground of the first Popes: Linus, Cletus and Clement, perhaps - which stood on the site. He told us of the archaeologists who got closer and closer to what, a very few years after St Peter's death, was already a site of pilgrimage; and he told us about the incredible mix up of archaeological finds caused by disagreements between the priests involved. He told us how St Peter's bones had been found.

Then he took us into the Necropolis. We were in a Roman cemetery. As we moved along the street he showed us the increasing signs - one piece of incredibly fine mosaic, one crude piece of graffiti - which showed that Christians had venerated this spot as St Peter's grave since the earliest times.

His story - the mix of detective story and archaeological dig - began to change as we got closer and closer to the grave itself. He told us the story of how Peter came to Rome to die the death Our Lord had prophesied for him. He told us what we had seen and asked for silence as we went to the chamber where we would see what remained of Peter's body.

In a niche in a wall covered in graffiti from the earliest pilgims to St Peter's grave the transparent plastic boxes in which St Peter's bones are now contained, and which were replaced there in 1968 in the presence of Pope Paul VI are clearly visible. The young man's injunction not to speak was unnecessary. We prayed: in my case as fervently as I can ever remember praying.

We went upstairs into the crypt. None of us spoke for a good while. In fact, apart from the odd "shall we cross here?" as we walked back to our hotel, none of us spoke at all for a couple of hours.

.
Via Ches via Elliot Bougis: as Chestertonian a paragraph ever to have come out of Mgr Knox.