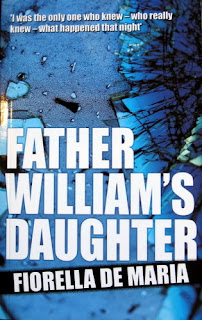 .
I read a book by this author recently - Fr William's Daughter - and I can't get it out of my thoughts - for the right reasons I should add. The blurb goes as follows:
"Francesca Saliba's father dies in a cleverly conducted traffic accident when she was eleven. As the only witness, she knew it was murder but only her English uncle, a West Country parish priest, believed her story. Her father's death marked the end of her Maltese childhood: within days, she had been spirited out of the country, her passport had been revoked and she found herself living in the eccentric little world of the one relative prepared to take her in - Father William Arrowsmith, the most English of men, the most Catholic of priests.
Father William's daughter tells the story of a refugee forced to start a new life in the alien world of an English market town and traces Francesca's journey home ten years later, where she begins her quest to discover why her father was killed and who betrayed him. But as Francesca and her long-suffering guardian revisit the murky post-independence world of her childhood, they are forced to acknowledge that the truth may be more elusive and more distressing than they could ever have imagined."
I had expected something like a detective story but found something rather more like an early P D James than an Agatha Christie. It is well written: sufficiently well written that I could imagine that she could develop into a real prose stylist. And she avoids sentimentalising a story that could have ended up dripping with saccharine.
She manages to evoke two different worlds: that of Catholics in a provincial town living in that semi-attached manner that Catholics outside the great clusters of the Faith in England have developed; and a Malta in which the problems of the late 1970s and early 1980s still smoulder beneath the surface ready to blaze up again. The main theme is about growing up and letting go, but I only realised that the second time through the book: I spent the first racing through to uncover the plot.
This is the Christmas present for somebody you can't really think what to get for, not least because in a few years time when she has become a bestselling author, they will be able to boast about how they have been reading her for years! But if you do buy it as a present, make sure you give yourself enough time to read it first!
Posted by Ttony at 15:18

Hahahaha! I can boast that this author is a friend of mine!!!

Can you get her autograph?

And if she is your mate, why haven't you blogged about her? Why aren't you singing her praises? Why have you left us not knowing about her?

Heheheh... she kept it quiet about writing books. She was writing stuff for the Catholic Herald, and did a column in Faith Magazine.

Anyway, a while back she mentioned that she was writing this book (it's her second.) Your post alerted me to the fact that the second book is now published... so I phoned her, and she's going to sign my copy!

I enjoyed the first book, but found the changes in time a little difficult, I prefer my stories to be a bit more chronological. She knows this (I told her) and she thinks that Fr. William's Daughter will be more my cup of tea...

I told her about your review...

...and I hope to see her soon, so maybe I'll get you her autograph so you can paste it into your copy of the book!!
:-)

Oh, and the website for ordering the book is here.

Delighted to read all of this.
You have whetted my appetite.
I'll give it a go.