In a discussion about the farewell address by Bishop McMahon on Brentwood reported here I said that part of the problem with the Church in England and Wales was that the Bishops were trying hard, not to be part of the Establishment, but to be part of the mainstream and I promised to try to illustrate what I meant.


Well, think about this.


This is how modern Catholic Cathedral building was thought of in England and Wales the 1930s. 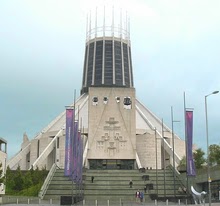 In the 1970s, it even flirted with a sort of muscular feminist style. 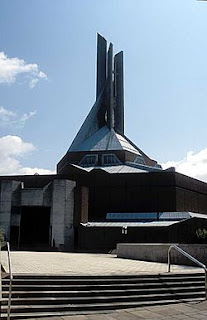 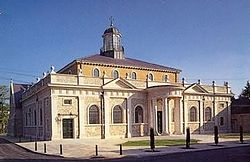 Brentwood is less a Catholic Cathedral than a homage to the Anglican churches built by Wren.  How has the English baroque become an appropriate point of reference for Catholics?


The answer is that after Vatican II the Church in England and Wales ditched the alliance between prelatial clericalism and working-class Irishness which marked the first hundred years after the Restoration of the Hierarchy in 1850, but replaced it by an alliance of two middle-class Bishops, Hume and Worlock, and an activist middle-class laity empowered by the 1980 National Pastoral Congress, with ecumenism as the highest pursuit.  As Clifford Longley put it just before Cardinal Hume’s death:


“As a Benedictine monk, Hume represented a way of being Catholic that set off deep resonances in the English psyche entirely different from those associated with working-class Irish Catholicism.


This home-grownness was precisely what English Catholicism needed at that point in its history. Many of its lay members had themselves joined the ranks of the English middle classes in previous 50 years, not least as a result of the success of Catholic secondary education since the 1944 Education Act. (Two individuals who symbolize this success are Cherie Booth QC, wife of the Prime Minister Tony Blair, and Bishop Vincent Nichols, Bishop in North London and undoubtedly Cardinal Hume’s favourite Bishop of that younger generation. John Birt, Director General of the BBC, went the same school as Nichols. All three are products of the post-1944 Education act Catholic grammar school system in South Lancashire.)


The 'signs of the times' of that transitional period included the appointment of Basil Hume to Westminster and Derek Worlock to Liverpool (both in 1976 and 1975), the consolidation of the Bishops' Conference of England and Wales, the programme of Consultation and renewal that led up to the National Pastoral Congress in 1980, the visit of John Paul II to Great Britain in 1982, and the impact of the early years of that papacy on the Church generally.  It would also include the remarkable convergence of doctrine under the auspices of the Anglican-Roman Catholic International commission, and the unprecedented change in ecumenical relations in Great Britain that followed.


Give or take the sort of minor rebuffs already mentioned, the Hume-Worlock approach to Church leadership has tacitly been endorsed by Rome in a whole series of episcopal appointments to the English Catholic hierarchy which gradually replaced the contemporaries of Heenan with those of Hume and Worlock; men of the temperament of Heenan with men of the temperament of the latter two.”


It is reflected in the quasi-Synod, the imitation House of Bishops that the Catholic Bishops’ Conference has come to be: not just the uncanonical pooling of Episcopal authority, but the more insidious search for compromise, as though it is a virtue as important as truth; not just the growth of an ecclesiastical civil service in Eccleston Square, but the parallelism of the diocesan structures which have been built in its imitation.  Worst of all is the striving for what they seem to perceive as an analogous place in society to the CofE’s: getting “one of ours” on Thought for the Day, for example; or the pursuit of regular meetings with junior ministers in DFID: what I described in an earlier post as the desire to be part of Society instead of being a Society apart.

The worst part of this has been the cost: for if, as seemed to be the regularly proclaimed thesis in the 1980s, there is no fundamental difference between Catholic and Anglican, then there is no longer any need to do the things which previously marked us out as different.  Out went Friday abstinence, not because it was a bad thing in itself, but because it made us stand out.  So did going to Mass every Sunday.  Catholic schools stopped being schools in which Catholicism was taught and became schools for Catholics and anybody else who wanted a place: sacramental preparation became the preserve of lay volunteers in parishes.  (But weren’t we all pleased when HM the Queen talked about “My Cardinal”, and attended Vespers at the Cathedral and appointed Cardinal Hume to the Order of Merit.)


The only good thing I can think of to say about the compulsory presentation of a Bishop’s resignation letter when he reaches 75 is that it hastens what Fr Z calls the biological solution; that it brings closer the time when the generation of Bishops nominated by Hume and Worlock gives way to a newer generation.  But a new generation of Bishops is not the solution to the problems caused by their predecessors: it is only the point at which what looks like a sisiphean task of reclaiming the Church might begin.


"Brentwood is less a Catholic Cathedral than a homage to the Anglican churches built by Wren. "

I think Brentwood Cathedral is a splendid building, but agree that it clearly doesn't have the form that a Catholic church should have- down to the effective unusability, as a devotional aid, of the stations of the cross, or the close arrangement of the seating that (even if one tolerates the seating in the round arrangement, which I don't) makes kneeling impossible.

I don't agree that it looks/feels Anglican, quite, either: the semblance that it has for me is to English civic buildings of the 17th/18th century: implicitly protestant, yes.

Brentwood looks more like an Edwardian provincial town hall to me.

That apart another perceptive analysis of the Warlock/Hume effect - thanks

Brentwood is twee. It looks as if mass is offered on a coffee table.

For all its faults, Liverpool has a befitting grandeur. The altar comprising a massive white marble block surmounted by its hanging baldacchino is raised upon a stepped platform (which celebrants actually have to climb) completely dominates the vast interior space.