29 Tuesday. (Feastday of Devotion) St MICHAEL, Archangel, double of the second class. Creed. White. [In Dioceses of Westminster, Birmingham, and Hexham and Newcastle, second prayers for the Bishop. In Diocese of Liverpool, plenary indulgence. In Diocese of St David's and Newport, Titular of the Pro-Cathedral, double of the First Class with Octave, during which commemoration of the Octave and Creed.]

3 Saturday. St Thomas of Hereford, Bishop Confessor, double. White. [In dioceses of Clifton, St David's and Newport, and Plymouth, principal Mass of the BVM, with Gloria, one Prayer, and Creed. White.]

That's the Green vestments put away until next year, when six of the Sundays after Pentecost will be green: wrap them well. If we were Victorians we would probably miss them: we're not; we won't.

It is Michaelmas on Tuesday, and only a Feast of Devotion instead of the Holyday it once was.  (It is ironic that its status as Quarter Day, like the status of Lady Day, St John's Eve and Christmas Day, survived even Cromwell's reformation: money matters.) If you aren't praying a Novena to St Michael, please pray to him on his feast day to guard the Church during the forthcoming Synod.

Saturday's rubric concerning the feast of St Thomas Cantilupe is odd, in that at this time the Benedictine Monastery at Belmont in Herefordshire was the Pro-Cathedral for the Diocese of St David's and Newport, yet did not make anything of the local saint. Once the Diocese of Newport (more or less today's Archdiocese of Cardiff) had been split away from the rest of South Wales, St Thomas's feast was raised in status in that diocese, but it is odd, to me at least, that the Church in England and Wales would not want to make more of an English saint whose canonisation in 1320 (he had only died in 1282) made him one of the few English saints of the modern era.

The parish of St Thomas of Hereford, at Weobley in Herefordshire is served by the Rev C B Quinn.  Mas is said on Sundays at 10.30, and on Holydays at 10.00. There is an afternoon service sat 3,00 pm.

St Thomas's shrine in Hereford Cathedral has been restored, or at least repainted in the sort of polychromatic colours experts believe is an accurate rendering of how mediaeval stone would have been painted.  It offers the tiniest of glimpses into a past which is a foreign country.  There is, of course, no chantry; no altar; no Mass; no place to hang ex votos; no place to light candles; no pilgrims' hostel; indeed, no pilgrims. 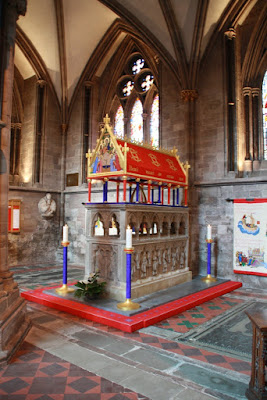 One of the small but important miracles in the depressing years after the failure of the Counter-Reformation in England is that those who kept the Faith managed in the main, not to turn to despair, but instead to resign themselves to the will of God.