.
1 SUNDAY Twenty-third after Pentecost, ALL SAINTS, double of the First Class with an Octave during which commemoration of the Octave and Creed. White.  Second Vespers of the feast, commemorations of the Sunday. White. After Bendicamus Domino Vespers of the Dead. Black. [In Diocese of Hexham and Newcastle Plenary Indulgence.]

5 Thursday. Of the Octave, semidouble. Second prayers Deus qui corda. Third prayers for the Church or the Pope. White.

6 Friday.  Of the Octave, semidouble. Second prayers Deus qui corda. Third prayers for the Church or the Pope. White. Abstinence.

7 Saturday. Of the Octave, semidouble. Second prayers Deus qui corda. Third prayers for the Church or the Pope. White.

With the exception of one feast, displaced in one diocese, in November the calendar begins to run down like clockwork towards the end of the year, and with odd minor differences like the diocesan distribution of plenary indulgences the whole of the Church begins to face up as one to the end of its year and the beginning of Advent.  All Saints is a blinding flash of light which is extinguished at dusk as before, in white vestments, he finishes Vespers of All Saints, the priest vests in Black for Vespers of the Dead, the first Vespers of All Souls. Priests outside Spain and Portugal will not have the right to say three Masses on All Souls Day until 1915.

Octaves, too: Octaves have given us another dimension of richness this year.  In our impoverished Church we have only two, both showing what the year used to be like.  Easter's Octave obliterates its week, Christmas's crowns its.

All Saints: this is the theme of this series, the Sanctoral taking precedence over the Temporal, as it were, until the reign of Pope Pius X just over 100 years ago. An ordinal number is nothing to celebrate: any Saint is. The Sabbatarianism implicit in raising any Sunday above any (or, 1910-1970, almost any) saint is more shocking, the more one thinks about it.  With a wave of the papal wand, Pope St Pius X abolished organic tradition and replaced it with an invented idea of what clever people assumed had been the rule at some remote point in the past, and began a century of liturgical vandalism. Remember that, the next time you want to criticise, for example, Pope Francis.

It has all gone, just as the Europe it had built would disappear utterly in 1918: destroy the Liturgy, destroy civilisation.

The Rev J B Colomb CB is the priest at St Edward the Confessor, Romford. On Sundays Holy Communion is distributed at 9.00, and High Mass with Sermon is at 11.00. Vespers, Instruction, and Benediction at 6.30. On Holydays, Mass is at 10.00, Rosary and Benediction at 4.00. On Days of Devotion and weekdays Mas is at 8.30. There are Confraternities of Our Lady of Mount Carmel and of the Living Rosary.  The parish is responsible for the Romford Union Workhouse.

And here is the Rev Colomb, courtesy of the parish website, and here is a short biography of him. Pray for the repose of his soul, and ask for your prayers, if he is already in Heaven, to be applied to his successors in this parish.


℣. Eternal rest, grant unto him, O LORD,
℟. And let perpetual light shine upon him.
℣. May he rest in peace.
℟. Amen. 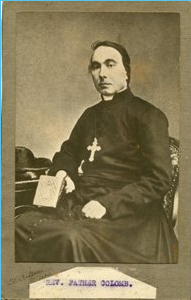 (For the 40-odd of you who follow this, there are just three more Sundays to go.  I bought copies of the Catholic Directory for the appropriate years before discovering that they are on line (though the online version misses out a lot of the adverts). If you want to have a go yourselves after my series has been completed, Advent 1863 begins on this page, and January 1864 here.)

What an interesting document! In running our parish website I have spent a lot of time pulling together various documents regarding the history of the Church down in Weymouth. This directory gives the opportunity of doing some cross referencing. What is quite clear is the richness of Catholic life less than a quarter of a century afteemancilation in 1829. So much zeal for the faith!

Johnf: In 1910 St Augustine's was served by the Rev David Barry. Masses on Sunday were at 8.00 and 10.30. Rosary, Confessions and Benediction were at 4.00, followed by Devotions, Sermon and Benediction at 6.30. On Holydays Masses were at 8.00 and 10.00, with an evening service at 7.00. Weekday Mass was at 8.00. On Wednesday evenings Rosary and Benediction at 7.00. On Saturdays Rosary and Confessions at 6.00 pm. The Convent of the Sacred Hearts on Carlton-road is served by the Rev George Barrett, who lives at Nitherdale, Glendenning-avenue.

Fr Barry was the driving force to build the first Catholic School and succeeded against strong opposition. St Augustine's School Was eventually built in Walpole Street Weymouth and opened in 1904. The buildings are there today. The School moved to a new site in Hardy Ave in the 1960's. Fr Barry eventually because Vicar General for the Diocese.

I know nothing about Rev George Barrett, so thanks for the extra snippet. I'll have to get in touch with the Diocesan Archivist and see if she knows about him. The Convent of the Sacred Hearts was run by the Sisters of the Sacred Hearts of Jesus and Mary. I think these were the Picpus Sisters who are mentioned in Hugo's "Les Miserables". The Convent was a school for many years but closed in the 1990's I think.