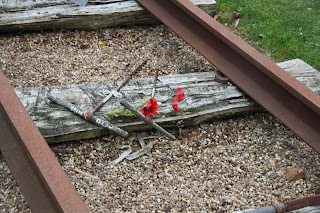 This is a photo I took last week at the National Memorial Arboretum near Lichfield in Staffordshire.  It is part of the memorial to those who worked as slaves on the Sumatra Railway.

My father fought the Japanese and was luckier than those who were captured and forced into slave labour, in that he was never captured.  Luckier too, in his lights, and in those of his comrades, in that they were able to fight back, to recover from the disasters of 1942 and gradually force the Japanese back. 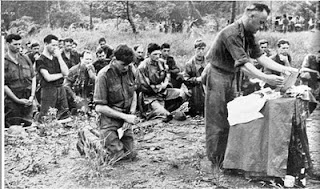 Much, much, more lucky, though, because they had priests who brought God to thm.  In the jungles of New Guinea, priests could still say Mass for soldiers.

Remembrance Sunday is next Sunday, and the official celebrations will take place then.  Tomorrow, though, at 11.00, I, and I imagine, most of my colleagues will stop work and make an act of remembrance.  Spare a prayer tomorrow for miliary chaplains.
Posted by Ttony at 20:52

Thank you. Tomorrow is Independence Day here in Poland, a national holiday, and a very inmportant Catholic and national event. Lamps will burn on all war memorials and graves.

I shall certainly be keeping the two minutes silence and praying for all those who died, my own family included.

Most interesting to hear of your father's service. My (late) uncle Tom was a sergeant for four years in the Burma campaign and fought at the battle of Kohima. He once showed me a piece he wrote about the veterans clubbing together after the war to rebuild the Church which the allies had to shell because the Japs were using it for cover.

I'm thinking about dear old Fr Thwaites, who loved the Japanese despite having survived the camps. Does anyone have any news of him?

R.I.P
Also, thankyou, it hadn't ocurred to me, catholic chaplains: they must have sowed many seeds, certainly they played their part indirectly in my family becoming catholic, but from WWI.
Grandfather spent 4 years on the W.front, gassed, the lot, and completely lost the very protestant faith of his father or even his own anglican leanings, and never darkened a church door again except for family obligations (weddings etc). He remained in his own way a God fearing man, mostly silent, yet when he did have anything to say about organized religion, it was to its pithy but not ranting discredit - except for the behaviour of the catholic chaplains he had seen and known at the front, which he might bring up when the conversation was anticatholic, or anticelibate, the English defect mode , after all. I always understood he was not the only WWI western front to thus react.