..
9 PALM SUNDAY, semidouble. Violet. Vespers of the Sunday without suffrages. [In Diocese of Hexham and Newcastle Plenary Indulgence.]

10 Monday. Feria. Second prayers for the Church and the Pope.

11 Tuesday. Feria. Second prayers for the Church and the Pope.

12 Wednesday. Feria. Second prayers for the Church and the Pope.


v On this and the following two nights the office of Tenebrae.

15 Holy-Saturday, double of the first class. Paschal Preface (till the Ascension). White.

I have no notices for 1865, and The Tablet archive seems to have become pay-to-view, but these notices are reposted as they show exactly what Holy Week would have been like. 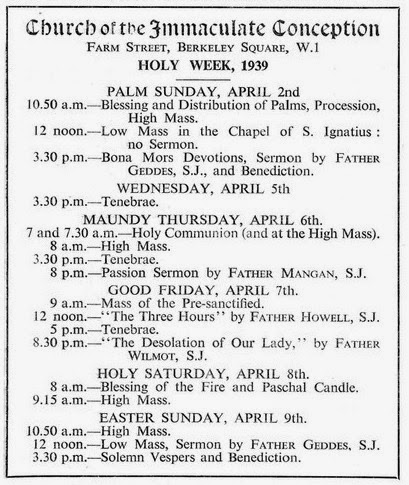 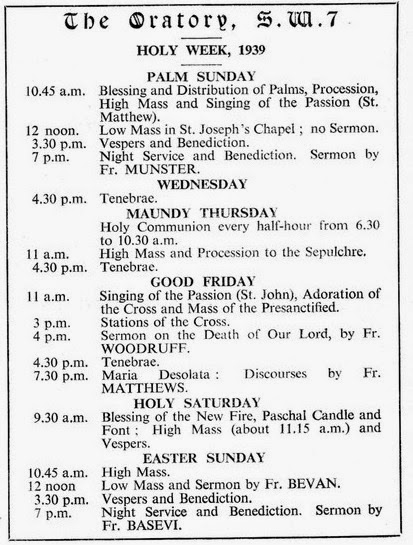 I wonder if you have any Holy Week schedules for more typical, modest churches? These schedules are obviously from churches with exceptional resources (number of clergy, choirs, etc).

Novian, good question. I haven't any and I think it will have to wait until I retire and can spend weeks at a time in Catholic archives. A clue, though, comes from the normal Sunday Mass practice in many of the parishes whose practices I list. The idea of a morning Mass, followed by afternoon instruction, then an evening service of Vespers and Benediction, is completely unremarkable in 1865. (Vespers has all but disappeared from parish life by 1910 - a separate study.) I think that mutatis mutandis any parish which could manage High Mass on a Sunday could do Holy Week with Tenebrae in the same way as the Cathedral, the Oratory, and Farm St.

But one day, I'll check.

Ttony. Thank you very much for your most
interesting Post. The idea of Vespers having
"all but disappeared from Parish life by 1910"
is one that begs discussion. The main question,
of course, is "WHY ?".

We look forward to your forthcoming Study
on that question, in due course.

I remember as a child, in the Fifties, that Sunday, indeed,
comprised Mass in the morning,
"Sunday School"
in the afternoon (with The Parish Priest as The Teacher.
He, also, gave out wonderful coloured stickers to the children
who attended. They could then stick them in their
"Sunday School Book". A most treasured possession),
and "RSB" in the evening (Rosary, Sermon, and Benediction).
This was often manipulated into Rosary,
Sermon, and "Beer", by "The Lads").

Plus, one question: The Westminster Cathedral Holy Week
Lists of Services included, for Maundy Thursday,
6 April, "8.45 a.m. - None . . ."
Can one assume this should have read "Terce" ?

Yes, having followed your 1862 and 1865 series with great interest, I thought of the frequency that Sunday evening services were mentioned as I was writing my question above. But then, that's merely once-per-week, on a Sunday.

"None" is correct. All ferial masses during lent are celebrated after none.

I would agree with Ttony's suggestion that most parish churches would have celebrated Tenebrae in the evening of the days of the Triduum and the main services in the mornings. The Little Hours were, sadly, confined to cathedrals and monasteries.

Westminster Cathedral would have had all the Hours so the time given for None needs to read as the Canons having recited Prime, Terce and Sext the Cd. Abp. is received and presides at None before celebrating the Mass.

On Palm Sunday and Easter Sunday the Mass would have been celebrated after Terce with Sext and None afterwards.

Zephrinus
I Certainly remember oodles more Parish stuff Sundays Fifties pm , weekdays too, even where single priest. My parents were frequent communion types (meaning Saturday confession weekly) and called 9am mass late ...( the longer fast)
You may be a touch older than me -I'm 67- with a better memory, mine went a bit wonky after glandular and rheumatic fever together, and I trust haler DV and- 'twere no great mastery - holier ..
Nonetheless having lived and biked to around 10 or more parishes and notthencalled mass centres by eleven (1961), lots of parental moves etc Brum, Bucks, Teesdale, East Midlands, Only one I recall having Sunday school , in the Gerrard's Cross area (st Joseph's), despite having a Catholic primary , very new and swiz, associated with the parish , it wasn't universal ,enough kids at different schools, hence on Sunday .... I associate, maybe wrongly , Sunday schools more with Protestants (I include Anglicans) and late 60s Catholicism, 50s more with RI,etc inc seperate first communion, classes at school, (the penny catechism by rote, or else, from teacher, "or else" in spades from when teacher was sister X , getting much more meat and enjoyable teacher when Fr came round), or weekends, like Catholic cub and sprout groups/troups/packs. I remember "Parish" annoyance that I'd received instruction(I'm not sure that was the word , maybe I remember it from budding converts being under instruction) for confirmation at school (small group, out of lesson time , tame nun with sarc off and ogre off and affable on )rather than at the Parish Church building , which would anyway have been impossible weekday pms earlyish, not Sunday.Sundays and Rosaries, including in processions,plenty of; in hindsight , a rosary for any reason and none it's who we were I suppose we'd sau nowadays.
Certainly all week lots and lots of rosaries, lots and lots of benedictions , considered more suitable for children , don't ask me why , lent staions of the cross more or less running -
I associate Tenebrae with Surrey , that may be prejudice. it would be good for someone to collate more before all the documents are thrown out and memory is gone. A lot of catholic variation, a lot of changes and developments but everywhere a solid FILLED 7/7 Catholic culture or cultures:scapulars, Pilgrimiges as a way of the seasons, single sex pilgrimages: women only ,men only pilgrimages (including boys over five), parish or diocesan or citywide prilgimagdes usually just oneday, processions to and from everywhere including tamely round the block for and about just about everything and anything, such as catholic cubs en route to mass once a month, that then to me weird Irish teetotalism as a road to sanctity, understandable I suppose, and penitential , third orders of, odds and ends of associations in which liturgy loomed large , 2 or 3 hr confession queues ........ a massive set of lifestyles maybe keeping a fence around Jesus Christ like the Jewish fence around the law....maybe...... which intended or not was dissolved or dissolved withering unwatered - a lot was Catholic car and telly ownership taking off coincidentally - after VII in time at any rate.(BTW Words and nastiness,yes but I cant remember stonethrowing individually or collectively at Catholics after about 1962-3, I ve heard different from some later friends, from other places said never, I think if we're not getting up their nose we're doing something wrong)