.
... was exactly like flying on any other day. Even flying into Washington was no different to what it's normally like. That's the way to show terrorists that they haven't won!
.
Flying back on September 12, and arriving at Heathrow on September 13 made for a tired blogger: I haven't done North America as (effectively) a day trip before: I don't recommend it. Though if you do, Virgin's Upper Class is a nice way to let Mr Beard take the strain.
.
Anyway, a completely unfair contrast between our two countries: one of these is two minutes out of Heathrow; one of these is two minutes away from Dulles; which is which?
. 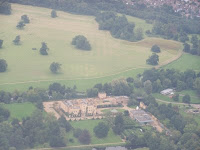 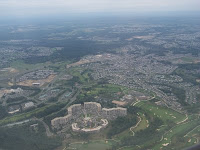 The one on the left is outside of Heathrow and the one on the right belongs to Dulles. It's the haze that gives the one on the left away.
When I fly it is always at the least cost so I have never encountered a bar on any of the aircraft I have flown on. Not that a small issue like that has deprived me of the odd beer, wine or even spirit.
To my delight they have at last got back to issuing real knives, forks and spoons. I still find that the only way to eat on a plane is to lift the dish up to just under my chin and then to shovel the food in from there.
JARay